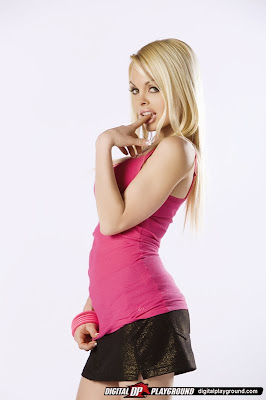 November 18, 2009 --- VAN NUYS, Calif. --- From November 19-21, Digital Playground contract girl and international superstar Jesse Jane®, dances at the Red Parrot in El Paso, TX. This will be Jesse’s second dance performance ever in El Paso after driving fans crazy a year ago at the Red Parrot. Each night, Jesse will perform at 10:00pm and 1:00am. Darius Belcher, owner of the Red Parrot says, “Jesse Jane is the most incredible, outgoing entertainer I’ve had over the last few years. She is absolutely amazing! We are expecting a packed house with sell-out crowds all three nights!”

For more information about Jesse Jane at the Red Parrot, visit www.redparrot.com/home.htm

“Everyone around El Paso is asking about Jesse’s return,” continues Belcher. “People are really excited. Since the Red Parrot was declared Feature Club of the Year at the 2009 Exotic Dancer Awards, it only makes sense to bring back Jesse Jane, the 2009 Club Favorite Feature of the Year.”

Native Texan Jesse Jane says, “Last year at the Red Parrot was just like a homecoming for me. Everyone was so sweet throughout the three days. El Paso really made me feel welcome and reminded me why Texas is such a great state. Come on out and let me show you my gratitude!”


About Jesse Jane:
A superstar in her own right, Jesse Jane® is an all-American blond, green eyed, sultry girl originally from Ft. Worth, TX. In three short years she ascended from Hooters® manager to Hawaiian Tropic® pageant winner to international fame with a Digital Playground contract. All of the exposure Jesse has received in various media outlets has contributed to her success but it was her leading role in Digital Playground’s benchmark film, “Pirates” that made Jesse Jane a household name. For more information visit www.JesseJane.com , www.Twitter.com/JesseJane or www.tinyurl.com/jessejanebio

About Red Parrot:
Darius Belcher’s brother Kevin Belcher founded the Red Parrot in 1994. Though Kevin is deceased, Darius and everyone else at the Red Parrot are determined to make his dream live on. They’re taking his dream to the next level by promising to bring all the hottest entertainers to the club. The Red Parrot is where the big boys play! For more information, visit www.redparrot.com