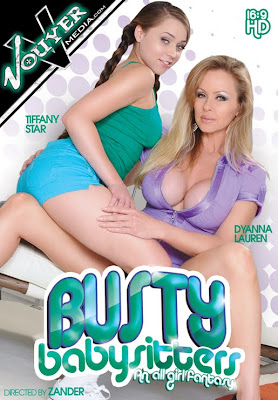 When the mood strikes this talented director to helm an all-girl release, you just know he’s going to put a unique spin on the genre. In this case of Busty Babysitters, it involves hooking up 2010’s finest (and most curvaceous) newcomers with some of the most seasoned players in the AVN Hall Of Fame.

It’s a stunning, beautifully languid sapphic sex fantasy that finds Zander’s camera getting in close to the action and staying there. Colorful wardrobe choices and inventive art direction provide the ideal compliments to this nearly perfect lesbian liaison

As is always the case when Zander is holding the directorial reigns, some winning extras, including behind-the-scenes footage that’s as hot as it is hilarious, and a bonus scene featuring exotic Victoria Valentina and Ashlyn Rae, offset the high-powered action of the main feature.

This three-hour exercise in all-girl revelry is brought to life with stunning 16x9 hi-def videography and comes encased in a beautiful full-color O-card that showcases Dyanna and Tiffany’s curvaceous charms to perfect effect.

The kittens are mixing it up with the cougars once again, so get ready to explore the sensuous all-girl fantasies of Dyanna Lauren and the rest of the Busty Babysitters.