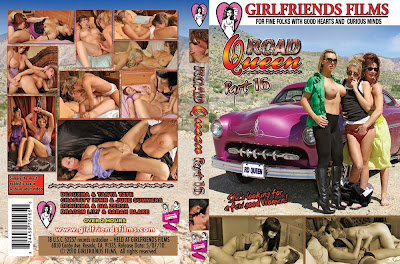 
Desperate for work and a place to stay, Deauxma is willing to do anything to please kinky Vegas strip club owner Tanya Tate. With the help of handcuffs, costume masks, and strap-ons, the ladies get right down to business negotiations, which result in a squirting climax. Tanya’s girls do more than dance, as busty cougar June Summers pays $5000.00 for a bedroom romp with the nursing fixated Chastity Lynn. Deauxma gets a visit from cowgirl Dia Zerva, and old sparks are quickly rekindled after a friendly back rub turns lustful. Meanwhile, Dragon Lily mentors inexperienced stripper Sarah Blake with a hands-on demonstration of what customers want. As Deauxma discovers, there is always something illicit happening in Tanya’s mansion.

Girlfriends Films Vice President Moose says, “Consumers are really going to love ‘Road Queen: Part 16’. The series is known for delivering some of our most intriguing characters, from a lusty goat herder to a desperate convict, and volume 16 captures it all. When the viewer becomes invested in the characters, the sexual heat becomes even more intense and enjoyable.”