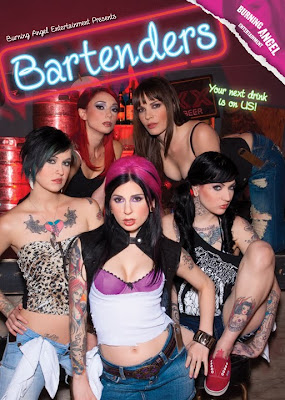 Your Next Drink Is On Them!
Burning Angel's Finest Headline The New 2-Disc Set
BARTENDERS

Burning Angel is pleased to present Bartenders, an ambitious new two-disc adult comedy distributed by Vouyer Media. This hilarious hardcore release teams the Queen of Alt-porn up with such established stars as Evan Stone, Dana DeArmond, James Deen and Mason Moore. These A-listers are supported by such Burning Angel regulars as Brian Street Team and a handpicked line-up of tatted-up alt-beauties including Kleio Valentine, Kylee Kross, and 18 year-old teen dream Moretta Coxxx.

An original tale of sex, suds, and the challenges of being a female entrepreneur in a male-dominated world, Joanna is justifiably proud of her latest creation, observing, "for those of you who fast forward through all the stuff I work so hard on that happens in between the sex scenes of my movies, well, this show is about hot bartender chicks who bang customers and other people who work at the bar. There! That is all you really need to know,” she concludes with a smile.

But she's quick to add that “for those of you who do care about the plot, the movie focuses on an evil health inspector who is trying to shut my bar down for being too sleazy. The sleaze is what my bar is know for - so I face the complicated challenge of trying to keep the bar in business and keeping my customers happy at the same time!”

And as always in Joanna’s feature releases, once the movie is over a plethora of extras await the viewer, including over an hour and a half of tantalizing behind-the-scenes footage that gives this two disc set a running time of well over four hours.

Funny, fast-paced, and hotter than hell, Bartenders is an instant classic in the lighthearted Burning Angel tradition. Sultry Texas beauty Kleio Valentine and the delectable Kylee Kross truly come into their own sexually, while Dana DeArmond delivers what Ms. Angel herself considers one of her finest performances to date.

Reflecting on the finished project, Joanna observes, "this was the first time I had ever shot the legendary Evan Stone, and having his personality mixed with my motley crew of guys and girls turned out to be a great combination. Dana DeArmond also did an amazing job. She took the script and really had fun with it, adding some lines of her own that turned out to be some of the best in the movie!”

So, just how far will Joanna Angel and her sexy barmaids go to save their den of iniquity? Only Bartenders holds the answer, and it will be distributed to stores exclusively by Vouyer Media June 1, 2010.