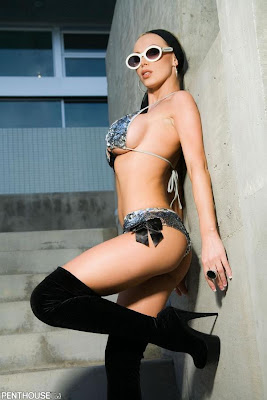 Fresh off of her triumphant effort as co-host of the 2010 XRCO Awards, adult entertainment superstar Nikki Benz continues to sizzle in the SoCal sun this weekend. She adds a three-day engagement in Los Angeles to her hectic spring schedule, dancing at the fabulous Spearmint Rhino May 13-15th.

“The weather in Californians been great,” says Nikki. “It’s really starting to heat up and by the time I’m through with LA, summer will be in full bloom. That’s my goal, to heat up the entire city. Any time is a great time to feature in Los Angles. My fans here are fantastic.”

Nikki will take the stage for five stunning shows during her three days in Los Angeles. She kicks off the engagement with an 11pm show on Thursday and follows that with two shows on Friday and Saturday at 11pm and 1am. All five shows feature all-nude performances from Nikki and her world-famous stage show that is guaranteed liven things up for everyone.

"I've never been made out to be a zombie,” Nikki states “and on top of that to have hot girl/girl sex was such a turn on! 'D2' will be epic!"

Wanting to push the envelope, Nikki accomplished another first in "D2," a white hot scene where she takes on three hard and willing studs at once! “I really wanted to push the envelope with 'D2',” adds Nikki “and this b/b/b/g scene is something none of my fans have ever seen me do. I'm really excited for both of these movies to come out!"

Come see Nikki Benz at the Spearmint Rhino in Downtown Los Angeles May 13-15 and look for “Busted” and “D2: Deviance” in fine retail outlets this summer.

Arguably the most famous Canadian adult film star ever, Nikki Benz has parlayed her good looks, stunning curves, natural talent, work ethic and keen business sense into a highly successful career. She has starred in over 100 adult films, graced the pages of virtually every men’s magazine on the planet, becoming a Penthouse Cover Girl, April 2010 Penthouse Pet and Hustler Honey. Nikki has achieved crossover success with mainstream projects, including a recurring character on FOXSports.com’s hit web series “Cubed.” Nikki is currently hard at work producing exclusive content for her re-launched web site www.NikkiBenz.com. She also tours the world entertaining her legions of fans with dance engagements and celebrity appearances.