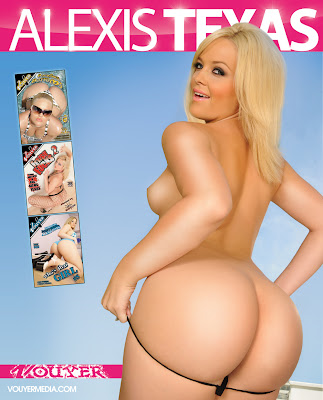 Los Angeles, Calif. - (MAY 5, 2010 ROADS TO MOSCOW) - In celebration of the recent XBIZ Editor's Choice award given to Anton Slayer's Not Really...The Dukes of Hazzard: A Hardcore Parody, Vouyer Media is pleased to announce that they are taking the show on the road.

After a quick 9:00am pit-stop at www.roverradio.com Friday Morning May 7th, Ms. Texas will head out on the highway for the city of Mansfield, where she'll sign autographs and meet her fans from 5pm-9pm at Adultmart Mansfield, located at 2400 Interstate Circle.

Saturday May 8th will see her throwing the General Lee into high gear for a pair of hotly-anticipated engagements, with the first scheduled for 1:00pm - 3:00pm at Adultmart Brookpark, 16700 Brookpark Avenue in Cleveland. From there, Alexis will round out her day with a 7:00pm - 9:00pm signing at Adultmart Eastlake, located at 34880 Lakeland Boulevard.

Considered one of today's most formidable performers, Alexis has been a member of the Vouyer Media family since the beginning, gracing the covers of such early company classics as Bombshell Bottoms #3, Who's That Girl #5 and the multiple AVN award nominee Fetish Fucks #2.

It is a rewarding relationship that has continued to this day, thanks to her fine work in Not Really...The Dukes Of Hazzard: A Hardcore Parody. And speaking of "The Dukes," the iconic General Lee will, of course, be on proud display at all three signings.

With awards that speak to her versatility as a sexual performer and a new Editor's Choice film that pays tribute to her stellar growth as an actress, Alexis Texas promises to bring a mega-dose of star-power to her Adultmart engagements.

Because just like the original Candy, this statuesque stunner is beautiful and charismatic, with just a hint of the unexpected and mysterious.