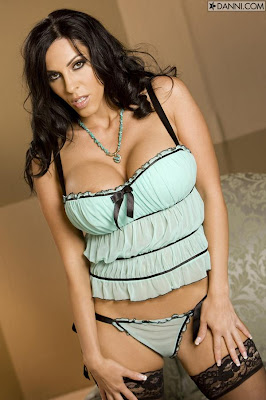 (Hollywood, CA) Veronica Rayne (http://www.myspace.com/veronicaraynexxx%29 is certainly a nominee contender for Best Villain in the 2009 Reality Awards for her turbulent part in last winter’s FOX Reality Channel show My Bare Lady 2. The brunette vixen showed off her spicy side to the nation of viewers by trading barbs and with co-stars and turning her no-nonsense attitude up to 11. While Veronica laughs when she is referred to as a "Villain" she adds “I think it is funny. I really am not, I just speak my mind and if someone does cross the line with me, I just let them know. If not being a snake in the grass and being forward is a villain I guess I am. If I’m nominated I think of it as all in good fun. I hope I win.”

“One thing I’m known for is being an outspoken woman who calls her own shots. When it comes to a reflection of me, my website, I need to be in control. I think it makes a more personal experience and connection with the websurfer to know what they are seeing is what I want to share with them,” said Veronica.
For those who can’t wait for the all new site to launch, Veronica is making a few special appearances over the next couple of weeks. First Rayne headlines Columbus Gold in Ohio for four nights beginning July 15th. There fans can see the sexy Rayne up close and personal as she seductively strips down on stage. An accomplished Feature Dancer, Veronica is known for enticing her audiences with her teasing and temptress ways. Columbus Gold is located 5411 Bethel Sawmill Ctr in. Columbus. More info can be found on the official website, ColumbusGold.com or by calling (614) 764-0500.

July 24th, Tampa gets hit with a wave of Rayne as Veronica makes a special in-store signing appearance at The Todd Couple’s Superstore for its 40th anniversary from 6pm-9pm. The Todd is located at 13417 North Nebraska Avenue in Tampa. Fans can pick up the latest DVDs that star Rayne and have them autographed or take pictures with the Reality/Porn Star. More info can be found on ToddCouples.com. Afterward Veronica joins Delilah Strong for her 2nd annual “Night of Seduction”! It’s one of the sexiest parties of the summer as some sultry stars of porn host an exciting night of dancing at Skye 1509. How often does one have the opportunity to spend the night hanging out with some of the hottest adult stars for a night of fun? Not often. Join the party as it takes place at 1509 8th Ave, Tampa Fl 33605 in Ybor City! More info on the “Night of Seduction” can be found on the club’s website; Skye1509.com

A new VeronicaRayneXXX.com is on the horizon, as is a possible Best Villain nomination at the 2009 Reality Awards! This summer is about to get a lot hotter for fans of Veronica Rayne!