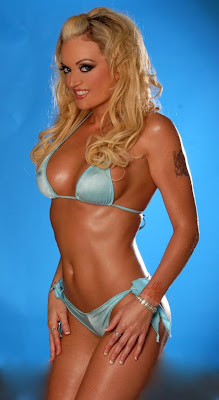 ( SAN ANTONIO, TX ) For millions of adult film fans, the name Monica Mayhem is synonymous with beauty, class and intense sexual energy. The multi-talented performer has carved out a successful career as an adult actress and a feature dancer known for her high-energy live shows. Monica brings that same energy and ability to dazzle an audience when she lights up the stage with her band Sweet Avenge.

The band already has 8 demo songs available on line. They are currently writing and recording more in hopes of having an album completed and available to the public by the end of 2009.

Monica writes the band’s music with guitarist Cordell Crockett from Ugly Kid Joe. Their collaboration has thus far been quite prolific. “I write all the melodies and lyrics, and Cordell writes all the music,” states Monica. “We have great writing chemistry. Our schedules make it tough to work, but its better to take your time and get it right, rather than rushing into an album.”

Multi-talented Monica Mayhem has been entertaining audiences for nearly a decade. The Australian-born beauty has graced the covers of many men’s magazines and proven to be one of the industry’s top draws. She has appeared in numerous mainstream films as well her impressive list of adult movies. As an actress, model, dancer, adult film star, talk show host, musician, songwriter, vocalist, writer director and producer she has worn many hats during her career and worn them well. Since entering the adult industry in 2000, Monica has starred in hundreds of adult movies and performs her famous stage show all around the globe. She has recently revamped her popular website www.MonicaMayhem.com. With her signature toy line “The Saucy Aussie Collection” and her upcoming autobiography, Monica Mayhem has all of the bases covered.