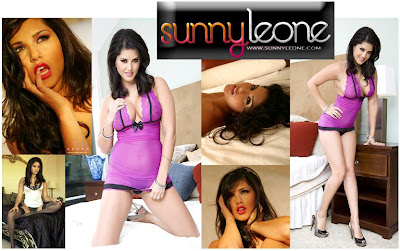 Celebrity Sex Kitten, Sunny Leone, Wants YOU
To Get Ready To Join Her & Her Friends in Sunny's Slumber Party

FOR IMMEDIATE RELEASE: July 16, 2009
(Los Angeles, CA) Multi-Talented Superstar, Sunny Leone, lives a very hectic life. From running her movie studio, SunLust Pictures, to starring in mainstream movies, to traveling all around the world making personal appearances that connects her with her fans, Sunny has very little time for herself. So, how does such an in-demand celebrity blow off steam, and just kick back to relax? Well, Sunny wants to show YOU how she does it with Sunny's Slumber Party, and she hopes you will join her!

SunLust Pictures wrapped production last night on their newest feature film, Sunny's Slumber Party, and the cast & crew are thrilled with the results. With the continuing success of SunLust's premiere release, Dark Side of the Sun, the company knew they needed something really BIG & completely different to follow it up. After months of research, working on the script, and casting just the "right" talent, filming has finally ended on the plot-based comedy appropriately titled Sunny's Slumber Party.

"Sunny & her management team really wanted to make a fun & sexy movie with a storyline that keeps driving the film," discussed the movie's director, Spencer Benedict. "I'm honored to be part of this project, & help her achieve her goals!"

Without revealing too much we CAN tell you that Sunny's Slumber Party includes an all-star cast, featuring Sunny Leone, Jenna Haze, Monique Alexander, Alexis Texas, Kiara Diane & Alyssa Reese. Rounding out the troupe are Ron Jeremy, Joanna Angel & Randy West with their hysterical non-sex performances. In the opening scene we find sexy young Sunny left at home alone by her parents for the weekend. This gives her an opportunity to throw THE SLUMBER PARTY OF THE YEAR with her best friends, including a surprise visit from her boyfriend. The party is in full swing when Uncle Bill suddenly shows up to keep an eye on the house . . . . . . & that's all we can tell you, for now!

"Acting in Sunny's Slumber Party was one of the MOST FUN times of my life, and I think that really shows up on film," purred Sunny Leone with a mischievous grin. "I love trying new things, and all I can say is - you will definitely get to see a side of me that my fans have never seen before!"

Pre-sale orders can be placed directly with Vivid or SunLust Pictures. Sunny's Slumber Party has a scheduled release date of September 2009, and will be distributed by Vivid.With an aggressive marketing plan for their next major release, which includes a national fan outreach tour and a multi-national internet presence, it looks like SunLust is about to strike gold again with Sunny's Slumber Party.