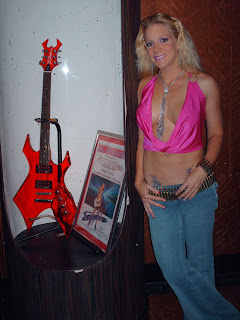 (Las Vegas, NV) Adult Superstar and Mainstream Crossover Celebrity, Heidi Mayne, will Host the Official A. I. Studios 2008 Gentlemen's Club Owners Expo & StorErotica After-Party in Las Vegas at the world famous Sapphire Gentlemen's Club August 25 - 27 from 11 pm - 4 am. After a successful first year in the adult film industry, Heidi Mayne recently expanded her list of projects to include a singing career and a feature dancing tour, which kicked-off at the beginning of Summer 2008 to rave reviews. With a jam-packed Expo schedule, including directing activities for her booth # 801 & 802, fan meet-&-greets, signing, performing live (both singing and dancing), giving multi-media interviews, and being an on-site news correspondent for the public affairs show I-On-Entertainment, it's no doubt that the radiant star is drawing on her health & fitness knowledge to keep her high-energy career in top gear. And, coming back to Sapphire to Feature Dance and Host the After-Party is just another way Heidi Mayne keeps in touch with her devoted fans.

"This will be my first time signing at the Gentlemen's Club Expo, and it's a perfect opportunity for me to add dates to my feature dancing tour and music, and reconnect with my Sin City fans," purred Heidi Mayne with a sly smile. "I love to dance, and give my sexual energy to my hungry fans. And Sapphire is such a great Club, I'm really honored that A.I. Studios and Sapphire has made me their feature dancer! Any chance I have to get back to Sapphire I'll be there!"

Heidi will be signing and posing for photos with her fans next to the $175,000 Wicked Porsche in the A.I. Studios Booth # 801 & 802 at the Mandalay Bay Resort & Casino during Tradeshow hours. Along with her upcoming music CD and the popular "Heidi Mayne's Fantasies" DVD Series (written and directed by Heidi Mayne), Heidi will be promoting her nomination as 2nd Annual Miss Booble Girl of the Year for 2008, her feature dancing tour, the launch of her own production company, and many more exciting new projects.