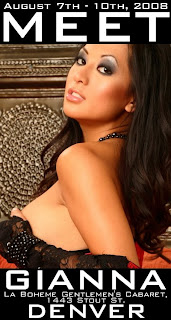 Exotic beauty Gianna Lynn (http://giannalynn.com/) has had an eventful summer so far making appearances all over of the country, shooting new movies and inciting excitement wherever she goes. Hot on the heels of her Tampa gig where she headlined two nights at 2001 Odyssey and hosted a pool party for Nightmoves' 20th anniversary, which will soon be seen on her GenesisOnline.com blog, Gianna is headed to Denver's La Boheme (http://www.labohemegc.com/)!

Beginning August 7th , Lynn takes the stage at La Boheme for a three night stint. Gianna will showcase her sultry moves and dangerous curves for a sure to be packed house of onlookers. Lynn will be joined in her sexy strip teasing by sexperts Nautica Thorn and Teanna Kai who will be performing at La Boheme as well!

Gianna Lynn is hitting it big! From her country wide Feature Dancer tour to her epic movie appearances, she's unstoppable. Meet the girl everyone can't get enough of this weekend at La Boheme in Denver!