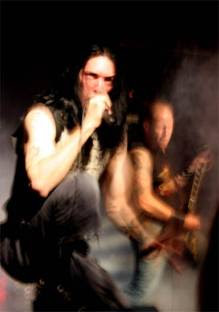 (Van Nuys, CA) August 11, 2008 – In less than 48-hours metal fans can catch a new glimpse into Matt ‘The Lord Zane’s’ world, when he appears on Dave Navarro’s hit internet show on Mania TV!

"It felt great to get back on stage and perform a few songs. It was also a cool way to introduce the new guys,” says Zane.

Corey Benjamin, a writer from The Rock Vine, was on hand and gave his impressions of the performance. "The band’s sound was heavier than it has ever been. Their stage presence was overpowering. Matt Zane dominated the stage like a mad pastor preaching from the pulpit of Hell."

Fans will be able to check out the appearance – and to see the full, live performance – on the Spread site: http://maniatv.com/shows/spread-entertainment.

Distributed by Evolution Distribution, Radium 2, starring the smoking-hot Tera Wray, Dana DeArmond, Camryn Kiss, and more, is available everywhere! The latest DVD release features music videos from Society 1, Akercocke, December Wolves, Municipal Waster and others (and let’s not forget the steamier videos… when the girls talk about their favorite metal songs to have sex to!). Plus, music fans should pick up Radium 2 because it’s got a cameo appearance from a mystery metal guest… a top-selling (and secret) artist!