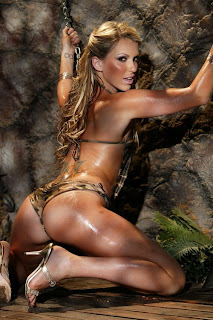 Director, Performer, Dancer. Courtney Cummz (http://courtneycummz.com/) does it all. A lithe blonde beauty, Courtney has made an impact in adult entertainment with high energy sex scenes. It's that intensity that has landed her a multitude of industry awards and nominations. Due to her popularity, the Zero Tolerance contract star for has been making appearances across the country, headlining gentlemen's clubs from coast to coast and performing her strip tease show for a legion of her fans, friends and supporters. This weekend Courtney finds herself returning to her home state of West Virginia for a special "One Night Only" feature show at Divas Club (http://divasclub.biz/) on August 22nd!

"Every chance I get to come back to West Virginia, I do," said Courtney. "It's always exciting to come back and see my old hangouts. I know everybody around town, and they all come out to my shows. It's a lot of fun and they are all so supportive. I use that positive energy to give a rockin' show!"

In addition to the feature show on Friday night, Cummz will make a signing appearance on August 22nd and 23rd at Sensual Nights Adult Super Store (http://www.sensualnights.com). 2pm-5pm, Courtney will be on hand to pose for photos with fans and sign her hit Zero Tolerance DVDs. Sensual Nights is located at 10539 Winchester Ave in Bunker Hill and is fully stocked with Courtney Cummz product.

Cummz has been receiving a lot of attention for her turn in the forthcoming Adam & Eve/Zero Tolerance joint effort, Roller Dollz, which releases on DVD September 9th however there are other recent Courtney vidz that are also "must-own" movies! DVDs from the Star/ Director include Courtney's Chain Gang which sees the hardcore hottie return to her "no holds barred" ways of group sex fucking and Illicit Behavior from Black Ice that stars Courtney in intense interracial action. All new Courtney scenes that have to be seen!

West Virginia is going to be rocked this weekend as Adult Entertainment Superstar Courtney Cummz comes back for a "One Night Only" feature show at Divas and a special set of signings at Sensual Nights!