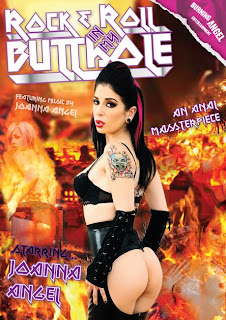 Are You Ready To Rock?
VOUYER MEDIA Presents
ROCK & ROLL IN MY BUTTHOLE
From
2008 AVN Award Winner JOANNA ANGEL

The industrious Ms. Angel rounds out this ass stretching marathon with some exciting special features, and even created original music for the movie's soundtrack! Joanna reveals that the song Rock & Roll In My Butthole "was written by myself and Princess Frank from the Los Angeles band Masterslave - I wrote the lyrics and Frank wrote the music. 'Brutal Enigma' shot a video for it which is featured in the movie - they look like Quiet Riot singing about buttholes!"

ROCK & ROLL IN MY BUTTHOLE is hot, sexy, and cleverly infused with the cool sounds and wry humor fans have come to expect and demand from the mastermind of Burning Angel Entertainment.

Crossing boundaries and breaking new ground, the BurningAngel empire is a refreshingly unique web cocktail of sex, rock n' roll, and pop culture. Its unmatchable edge has claimed a burgeoning bi-coastal community both in and out of cyberspace. BurningAngel.com officially launched on April 20th, 2002, with a few sets of photos, and one band interview. The amateur experiment, launched by two college kids (Joanna Angel and Mitch Fontaine), has since exploded into a fierce indie company that has pioneered a new species of erotica, and has since given way to the emergence of Joanna Angel as the site's performing star, earning her the title of the "Queen of Alt-Porn."

In addition to its Internet success, the overwhelming popularity of BurningAngel.com spawned the website's sister DVD production company, BurningAngel Entertainment, in January 2006, and continues to release acclaimed videos that offer a unique, playful variation on pornography.