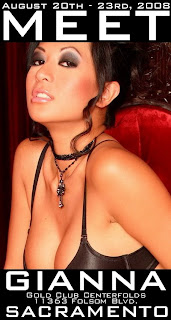 Exotic Asian beauty Gianna Lynn (http://giannalynn.com/) continues her headlining tour of gentlemen's clubs with an appearance and signing at Gold Club Centerfolds (http://www.goldclubcenterfolds.com/)! Hot on the heels of wrapping up her featured turn in Pink Kitty Video's The Vampiress, Gianna Lynn is already on the move! Beginning August 20th, Lynn is hitting the road for four Featured Dance dates at Gold Club Centerfolds. Gianna will be performing her electrifying sexy stage show nightly with a special noon show on Friday. The 5'4 brunette babe has been a hit with clubs across the country and has been booked far in advance due to her popularity.

"I bring a lot of energy to my shows and I make them interactive," says Lynn on her success. "I involve the crowd as much as I can. When you leave a Gianna Lynn show, I want you to feel as though you've just been part of the show!"

The superstar has had a busy shooting schedule and her calendar has been packed as she has filmed several high-end adult movies, one of which is The Vampiress (http://thevampiress.com/) from Pink Kitty Video. Lynn appears in two sex scenes, one with sex kittens Audrey Bitoni and Amber Rayne, and in another three way with Amber and Talon. The website promoting the movie features Gianna and is set to have behind the scenes pictures and video. The Vampiress is scheduled for a Halloween release.

Several exciting new Gianna Lynn DVDs have been recently released. Titles include Kissing Girls and Predator II: The Return both from Wicked Pictures. Lynn also stars in and is the cover girl for Double Play #7 from Digital Sin. For Lynn lovers, these new DVDs are 'must have' purchases!

Meet Gianna Lynn this weekend as she hit's the Gold Club Centerfolds for several nights of sexy strip tease fun, and pick up one of her newest DVDs to watch the sultry star in triple X action!