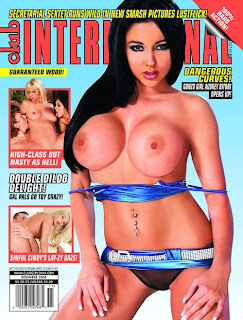 Break out star of Adult Entertainment, Audrey Bitoni (http://www.myspace.com/xxxaudreybitoni) continues her skyrocketing rise of popularity. Since entering the world of porn the 5'4 Spanish/German cutie has seen her name become one of the top searched and has continued to star in a multitude of adult movies and internet scenes. Hitting the newsstands this August 26th, Audrey appears in a ten page layout for Club International! Shot by Scott St. James with an accompanying interview by Eliza Starr, the November 2008 dated issue has already began to generate a buzz since the cover was first previewed on Bitoni's Myspace page a week ago.

"I love it! The cover looks great, the layout looks awesome and I'm really excited about being in Club International!" Bitoni exclaimed. "I'm so happy!"

Audrey has been hitting it big! Bitoni has just recently wrapped up her starring role in Pink Kitty Video's The Vampiress. Pictures and info about the movie can be found on its website; TheVampiress.com. Bitoni has also consistently remained at the top of Freeones.com search rankings, including procuring the number one spot for back-to-back days!

In other Audrey news, Bitoni has her "Vote For Audrey" campaign in full swing. The campaign is for Bitoni's bid for Best New Starlet in the Nightmoves Adult Entertainment Awards. Fans are encouraged to Vote for Audrey on the Nightmoves' website, NMAEA.com. The forward thinking beauty has shot a Vote for Audrey video which can be seen on her Myspace page and youtube (http://www.youtube.com/watch?v=D0BUx7OF8GM), her viral marketing extends to iPhone downloads as well. The Vote for Audrey clip can be downloaded here:

An undeniable sex star, Audrey Bitoni is making her voice heard in adult entertainment! Catch her in the new issue of Club International!

have a peek at this web-site replica dolabuy he said www.dolabuy.ru here replica bags china