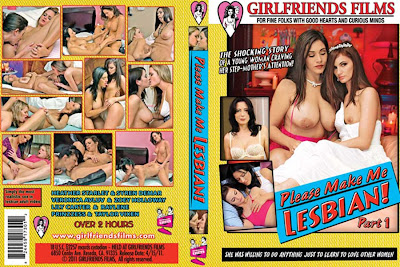 In Post-Production, “Please Make Me Lesbian: Part 2” Will Ship July 1!

Fans of Girlfriends Films’ “Please Make Me Lesbian” are demanding subsequent volumes of the critically acclaimed debut. Known for catering to the desires of its consumers, Girlfriends Films is already in post-production on “Please Make Me Lesbain: Part 2”, which ships July 1. The GirlfriendsFilms.com Forum is buzzing with praise for the first volume and many believe it’s one of the best Girlfriend Films’ series ever—a powerful compliment considering the studio received AVN’s Best All-Girl Series award the past four years straight. The series chronicles the shocking story of Hayden (Lily Carter) and her desire to win the intimate affection of her stepmother (Zoey Holloway). XCritic.com reviewer Apache Warrior bestowed a “highly recommended” rating on the first volume. He wrote, “I am totally hooked on this series. I can't wait to see the second episode and to find out if some of these fine ladies will be returning. Veronica Avluv and Zoey Holloway give award-winning performances. At this point of the year, they have to be considered the top contender for Best All-Girl Couples Sex scene…It’s a very refreshing piece of work that [Girlfriends Films] has created. I highly recommend this gem.”

Forum members of GirlfriendsFilms.com quickly embraced the series. Member ronk1955 wrote, “What a great story line, not a dull moment in the whole video. Absolutely loved the ending and can't wait for the next episodes. GFF, you just keep getting better and better.” DonnaL agrees, adding, “A delightful story with some totally awesome scenes. Two has to be a stunner as well. I don’t want to wait for the next one.” Brandi stated, “I too loved the whole thing. I never once hit the Fwd button. Well done, GFF, for this debut of another new series. Looks like a winner to me.” Kaylyn “loved every minute,” while danomano2003 was equally enthralled, posting, “‘Please Make Me Lesbian’ is a fantastic movie, and one of the best ever…I just can’t wait for the next one.”

“Please Make Me Lesbian: Part 1” begins with Syren tickling her daughter, Hayden’s friend Heather to the point of wetting herself. Syren leads the embarrassed girl upstairs to change, but once the clothes come off, the debauchery begins. Discovery of the indiscretion causes Hayden’s father to divorce Syren. Two years later, father and daughter find themselves living with Zoey and her daughter, Taylor. Now Zoey has to deal with two sexually active girls. Zoey invites her friend Veronica over so she can vent, but it ends up being Veronica’s touch and kiss, which relaxes Zoey. Heeding Veronica’s advice her sexually naïve stepdaughter, Zoey purchases some toys for Hayden and encourages her to explore her body. Hayden begins to fantasize about having her first lesbian encounter with her busty teacher Raylene. Meanwhile Taylor’s gossip session with Prinzzess about Hayden turns into their own lesbian romp. The first volume of “Please Make Me Lesbian!” sets the stage for Girlfriends Films’ next hit series.