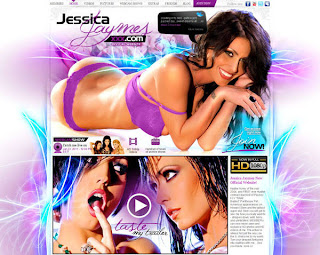 The site launched this week and is the only official home for the stunning and alluring brunette superstar. Part of the www.Spizcash.com family of sites, www.JessicaJaymesXXX.com features daily updates, stunning HD video, thousands of still images, bonus sites, weekly FREE camshows for members and innovative special features and of course, unparalleled access to Jessica herself.

In addition to the daily updates, exclusive content, personal blog, and HD video content, www.JessicaJaymesXXX.com offers fans a unique opportunity to star opposite their favorite sexy siren. Members can participate in the "Fuck My Fan" program ( www.FuckMyFan.com ). Jessica loves her fans so much that she plans to create new content starring lucky men and women. If you have ever fantasized about making a video with Jessica, this is a unique chance to make your dreams come true.

"I love performing in front of the camera" adds Jessica. "Now I get to perform on my web site, tailor the updates to what my fans want to see and deliver the very best to each and every one of them."

Born in Anchorage, Alaska to a Czechoslovakian and French mother and a Seminole father-who at an early age of ten relocated to Arizona. Father was an under cover DEA agent and patrolmen. In her early years mastering honors art, classical piano and impeccable writing skills, she developed a strong desire to become a school teacher. She attended college. At the early age of 18 she graduated college and began teaching grade 4, 5, and 6, ages 9-12. Even though Jessica genuinely enjoyed teaching, she was at heart, an exhibitionist (her first movie roll proved out to be deemed more than appropriate titled "sexhibition # 9").

In April of 2001 she decided to pursue a career in movies, modeling and entertainment. She immediately landed the lead roll in Playboy TV's "Totally Busted", catapulting her to instant stardom. Well, as it turned out, Playboy wasn't the only one with their eyes on Jessica. In 2004 she participated in a PPV television show entitled "Can You Be A Porn Star?", and won...taking home not only the title but the grand prize of $100,000. After gaining much recognition, she was approached by Mr. Larry Flynt to represent Hustler by becoming Hustler's very first contract star. She was selected amongst thousands of beautiful and ambitious young ladies. Jessica willing signed and proudly held the title. Thus, creating some of her most recognized work in film today. "Repping an entire company by myself of this caliber was exhilarating and exciting".

In 2005 she found herself at the epicenter of tabloid scandal with a well accounted story that split up one of Hollywood's most admired couples and soon becoming one of-the king of all media-Howard Stern's frequent guests. Jessica has never found herself timid or shy when being in the public eye. You can also catch her on the big screen in "How To Make Love To A Woman" and a couple episodes of "Weeds" as she performs her cameos.

Jessica continues to grace the pages of every major mens magazine on the world-recently receiving Penthouse Pet. With all her accolades from big screen to small screen, magazines to movies, she continues to dominate the adult circuit. In 2008 Jaymes and two others formed their own company (spizoo.com and spizcash.com) becoming independent. Using her insight as an entertainer to expand herself and others.

Jessica spends almost every day of the week maintaining her identity through appearances, shoots, conventions, hosting, radio, movies, magazines, web presence, and most importantly, pleasing the fans. She constantly puts forth her best performances and most interactive experiences through her personal site www.jessicajaymesxxx.com. You can see her weekly live cam shows, private cam shows, weekly blogs , diaries, weekly video updates, weekly picture updates , and hardcore exclusive sex! "I love broadcasting live from my house, it's a place where I can interact with my fans and get down right nasty". This is her web home. "It's all about attitude and sex appeal. Even after everything I've done, shooting hardcore movies for you is at the top of the list"!