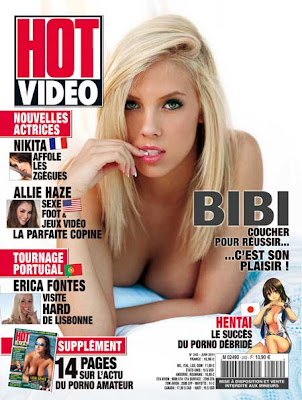 Digital Playground Contract Star BiBi Jones graces the cover of the June issue of Hot Video magazine, on newsstands now. The blonde starlet is featured in a fun, flirty 8-page spread where she gives readers an inside peek into her daily life.

“I loved this photo shoot because it expresses the real BiBi Jones,” she says. “There wasn’t a big studio crew and I barely had on any make-up. The setting was intimate and stress free. The photo spread gives my fans a taste of what my life looks like on an average day.”

“The shoot was effortless,” says Franck Vardon, founder of Hot Video magazine. “The sexy, glamourous ambiance that BiBi exuded was like sharing a sweet moment with Marilyn Monroe.”

“BiBi’s star is definitely on the rise,” says Samantha Lewis, Digital Playground CEO. “We’re so proud of the work she’s doing at Digital Playground. She’s totally committed to every project, whether it’s a photo shoot or a movie. She tackles each gig with such gusto! This Hot Video photo spread is a perfect example. I love how her personality really shines through.”

It’s been non-stop for this 19-year-old Oklahoma native. She’s on the covers of Hustler and Club, and was a big hit on The Howard Stern Show in May. BiBi’s first Digital Playground movie, “Assassins” is a bestseller and has been getting rave reviews! She stars alongside her contract sisters Jesse Jane® and Riley Steele™. Check out the “Assassins” trailer here:
http://www.digitalplayground.com/mov/assassins.html