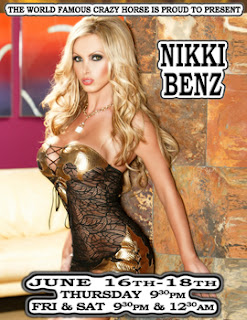 Reigning Penthouse Pet of the Year Nikki Benz is an extremely popular entertainer and model who has the Twitter followers to prove it. Fans who just can't get enough Nikki Benz follow her on the social networking site and get a daily dose of Nikki news and her trademark sense of humor. These ardent fans, affectionately known as the "Benz Mafia" are a rapidly growing group whose numbers recently reached a historic milestone. Nikki's Twitter followers now number more than one hundred thousand and the total just keeps climbing.

“It means a lot to have reached over 100 thousand followers," says Nikki. "My Twitter followers who are also known as Benz Mafia are amazing. I want to thank everyone for their support! I tweet often, usually about my career, my personal life, sports, my love for music and Starbucks. I often post sexy pictures and talk a lot about sex. It's a perfect balance of everything that's fun and interesting."

Nikki's fans can get a closer look at their favorite adult entertainer this week when she heads to San Francisco for a three-night dance engagement at Crazy Horse. From June 16-18, Nikki will be doing five shows at the spectacular club. As always, Nikki will be available after her stage shows to sign autographs, meet fans and offer exclusive memorabilia including her Penthouse Pet of the Year issue.

"Following me on Twitter is fun," says Nikki. "But my live shows are always special. I love meeting my fans and putting on a live show for them gives me a great sense of personal satisfaction. Hopefully the feeling is mutual."

Come see Penthouse Pet of the Year Nikki Benz at Crazy Horse in San Francisco June 16-18 and don't forget to join the growing legion of Benz Mafia followers on Twitter.

For more of Nikki check out her personal website at www.nikkibenz.com and her popular social hangout www.twitter.com/nikkibenz


About Nikki Benz
Arguably the most famous Canadian adult film star ever, Nikki Benz has parlayed her good looks, stunning curves, natural talent, work ethic and keen business sense into a highly successful career. She has starred in over 100 adult films, graced the pages of virtually every men’s magazine on the planet, becoming the 2011 Penthouse Pet of The Year, a Penthouse Cover Girl, April 2010 Penthouse Pet and Hustler Honey. Nikki has achieved crossover success with mainstream projects, including a recurring character on FOXSports.com’s hit web series “Cubed.” Nikki is currently hard at work producing exclusive content for her re-launched web site www.NikkiBenz.com. She also tours the world entertaining her legions of fans with dance engagements and celebrity appearances.