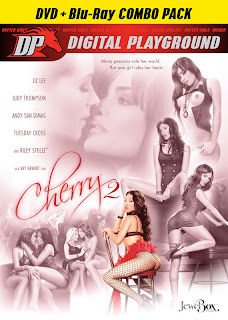 “This next release is nastier than the first one, as far as the sex goes,” says “Cherry 2” writer/director Kay Brandt. “The story moves into some rather dark and mysterious places which allows for the sexual performances to be more intense than the previous episode. The pairings are unique and the chemistry is off the hook between the girls.”

“We’re thrilled with the overwhelmingly positive feedback we’ve gotten from the first movie,” says Digital Playground’s CEO Samantha Lewis. “We’ve grabbed the attention of the industry and fans in a big way, with both critical and artistic praise. I know fans of ‘Cherry’ are going to love part two.”

The series is helping to open up a new area of the adult market that is proving to be very popular among consumers. “Cherry 2” continues the journey of provocateur Cherry, the mysterious owner of a private lesbian strip club. The JewelBox fan site also contains exclusive cast photos, free downloads, wallpaper and is optimized for iPhone and iPad users.