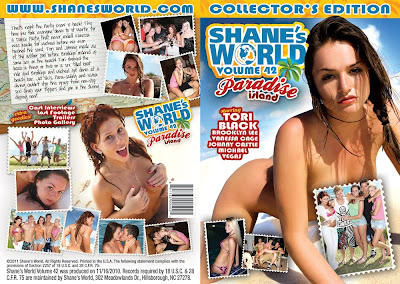 Shane’s World Studios is pleased to release the trailer for the anticipated 42nd volume of its flagship series, “Shane’s World”. Available to own April 26, the DVD is packed with jet skis, parasailing, nude beaches and non-stop sex. The DVD is the first release in a new distribution deal between Shane’s World Studios and Adam & Eve. Adam & Eve Vice President Bob Christian says, “We’re really happy to see the first DVD release in our partnership with Shane’s World. It’s an astounding brand with a fourteen-year history, and the latest volume clearly reaches some new heights that both loyal fans of the series and new customers will appreciate. I’m confident the distribution deal will lead to increased sales and an even larger consumer base around the world.”

To view the safe-for-work trailer for “Shane’s World 42”, visit www.youtube.com/watch?v=ZXdapuEMPLk .

To view the hardcore trailer for “Shane’s World 42”, visit http://shanesworldsales.com/SW42.html .

To celebrate the shipping of “Shane’s World 42”, Shane’s World Studios is holding a Porn Star Karaoke release party. On April 19 at 9:00 pm, the adult industry and former Shane’s World collaborators are invited to Sardo’s Grill and Lounge in Burbank, California. All night, exclusive Shane’s world memorabilia, toys and autographed merchandise will be given away, as well as plenty of free drink tickets. In addition, preliminary casting for upcoming productions will occur as Shane’s World scouts the industry’s new talent. The giveaways for the party include Shane’s World toys from Cal Exotics, a signed t-shirt from “Shane’s World 22” (includes autographs from Calli Cox and Sunrise Adams), famous props from various Shane’s World movies, t-shirts, and more. Camera Guy will pass out free drink tickets throughout the night.

Adam & Eve is the nation's largest marketer of adult products with millions of satisfied customers in the United States and all over the world. Founded in 1970, Adam & Eve is also one of the oldest names in the rapidly evolving adult industry. Adam & Eve is the flagship company of PHE, Inc. While Adam & Eve caters to a general audience, PHE also owns several smaller companies that focus on meeting customers' special needs. For instance, Adam & Eve Pictures produces original titles with Adam & Eve contract stars Teagan Presley and Alexis Ford. Adam & Eve is responsible for numerous award-winning movies. For more information, visit http://www.adameve.com