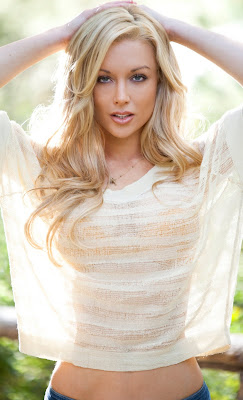 Digital Playground Contract Star Kayden Kross will be one of the featured artists reading her original poems at Luna’s Cafe in Downtown Sacramento, California this Thursday, April 21st.

Kayden will be joined by artists Becca Costello, Frank Andrick, David Houston and Xavier Altimiras. “Having published both Kayden Kross and Becca Costello in the past to great response, I can already sense a groundswell of curiosity and support for what both artists will do in taking the printed page to live stage,” says Frank Andrick.

Poetry Unplugged’s performance series will be hosted by Geoffrey Neill. The event is partially funded by Poets & Writers Inc., a nationally based literary agency that supports published writers. Check out www.pw.org for more information.

“If you’ve read any of her blogs, you know that Kayden is educated and fabulous -- and writing comes naturally to her,” says Digital Playground CEO Samantha Lewis. “Her poems range from funny to clever to poignant. She’s a perfect example of a bright, empowered woman and I’m so proud of her.”

About Digital Playground:
Digital Playground is the world leader in adult filmmaking and interactive formats boasting the largest HD library available, as well as sexy and powerful novelty lines to compliment blockbuster films. Since the Company’s inception in 1993, Digital Playground has earned over 350 awards, currently garners more than 80% of high definition sales within the adult market, and is a leading provider of Blu-ray™ titles. Female owned and operated, Digital Playground emphasizes quality first, employing fastidiously high production values in erotic film for women, men and couples. Digital Playground’s commitment to excellence, innovative technology, brilliant full-length productions and exclusive Contract Stars are the secrets to its success and makes Digital Playground the most highly demanded supplier of content for hotel, IPTV, cable, pay-per-view and mobile networks worldwide. For additional information, visit www.digitalplayground.com, www.facebook.com/DigitalPlayground, or www.twitter.com/dpxxx