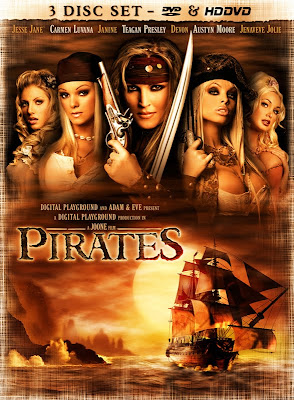 A list of the Ten Best Topless Sex Scenes has just been released and Digital Playground’s blockbuster “Pirates” -- and its star Jesse Jane -- made the cut. The popular mainstream website ScreenJunkies.com looked at thousands of movies before selecting its Top Ten. “Pirates” is the only adult title on the list. A link to the article is here: http://www.screenjunkies.com/movies/movie-lists/10-best-topless-sex-scenes-2/

“Wow! They had all those movies to choose from and they picked me,” exclaims Jesse Jane. “That shows how super hot the scene was! I’m excited that after all these years, people are still watching and loving ‘Pirates.’ I think out of all the films I’ve shot for Digital Playground ‘Pirates’ will always be one of my favorites. The special effects were insane, the costumes were gorgeous and the sex scenes were amazing.”

Award-winning “Pirates” director and Digital Playground Founder Joone agrees, “When Pirates came out in 2005, it was the most comprehensive and ambitious adult production ever made. I’m glad that people are still talking about this movie and watching it. I’m honored that ScreenJunkies.com put our movie on its top ten list.”

Digital Playground’s CEO Samantha Lewis says “Pirates” has always been one of DP’s biggest sellers, “We cannot keep this movie in stock! Six years after its release, ‘Pirates’ is still flying off the shelves. Same with the sequel, ‘Pirates II’. People just love these two movies!”

“Pirates” was originally released as an adult film, but became so popular that Digital Playground made an R-rated version and released it to mainstream audiences. “Pirates” has won dozens of awards including AVN’s Best Movie and Best Director. The sequel “Pirates II: Stagnetti’s Revenge” was also a huge blockbuster. For more information, visit www.piratesxxx.com