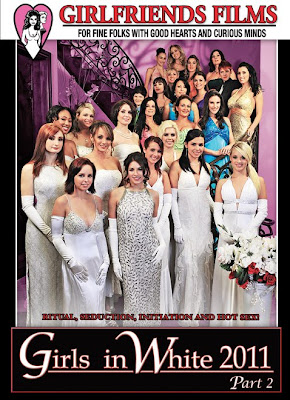 The second volume of “Girls in White 2011” released from Girlfriends Films on DVD March 29. Thornhill’s anticipated lesbian debutante ball finally arrives, giving the town’s cougars a chance to divide up the young debutantes. The glamorous ball sparks lust and desire, spilling over into some wild bedroom scenes. “Girls in White 2011: Part 2” stars Girlfriends Films contract performer India Summer, along with Elexis Monroe, Danica Dillon, Nicki Hunter, Dana DeArmond, Shyla Jennings and Kodi Gamble. Girlfriends Films Vice President Moose says, “The ‘Girls in White’ series is an epic undertaking each year in which fans are introduced and reunited with nearly 30 beautiful girls. Full of drama and dresses, it’s one of our most popular series. The cast in part 2 is fantastic, and we expect the movie to meet with great success for retailers.”

“Girls in White 2011: Part 2” begins with India Summer welcoming the incoming class of debutantes. During the instructional film, India catches some of the girls fondling each other and informs them touching privileges should be reserved for the older ladies of Thornhill. The next day, the newspaper announces all the Girls in White candidates. Nicki Hunter preps Danica Dillon on how to embrace one’s sexuality by showing her the intimate perks. Danica is well versed by the time the ball comes around. Cougars and cubs mix in formal attire as the ceremony begins. Elexis Monroe takes Shyla Jennings on a tour of the mansion to find a quiet place. Dana DeArmond takes a liking to Danica and hopes to further her lesbian education. Meanwhile, India leads Kodi Gamble away for a night of pleasure.

After observing production on “Girls in White 2011”, AVN Media’s Mark Kernes writes, “Watching 30 or so luscious babes strutting around in strap-less, floor-length ball gowns will definitely start some tents rising—and Girlfriends’ policy of letting the gals work with whomever they want is the perfect capper (and starter) for any ‘Girls in White’ volume.”

Via Twitter, XCritic.com reviewer Apache Warrior writes, “‘Girls in White 2011: Part 1’ is a fine addition to this sexy looking series. The women look very elegant in their gowns. The sex is extremely hot and sizzling. Moreover, India Summer's dress accentuates her sexy body. This series has returned to a very fine start. A true winner.”

In a review of the “Girls in White” series, AVN Media’s Armistead Smathers writes, “It’s a lovely story and the girls in it are truly gorgeous…The sensual nature of the piece reveals the fact that it was made by ladies for ladies, but it’s nice to be a guy on the outside looking in…Fans of hot lesbo action will like it.”

Filmed in high definition with Sony XDCAM cameras, “Girls in White 2011: Part 2” is a visual treat. Part 2 includes a photo guest list, plus trailers to hit Girlfriends Films movies. The DVD is presented in 16:9 widescreen format.

More on our stars: