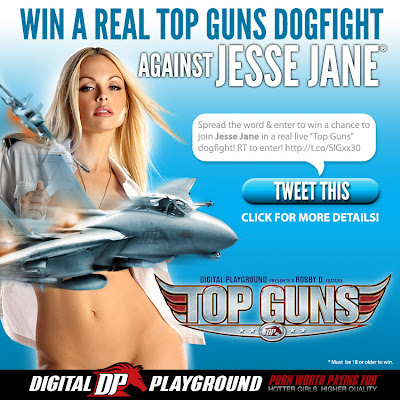 In Digital Playground’s new bestselling movie “Top Guns,” superstar Jesse Jane plays a fierce fighter pilot who gets into dogfights with her enemies. Now, Digital Playground has launched a contest where the grand prize winner will get to take on Jesse Jane in a simulated dogfight in a real aerobatic plane!

“When they asked me if I wanted to fly in the contest, I was so excited!” said Jesse Jane. “I got such a rush shooting the aerial combat scenes in ‘Top Guns.’ So I can’t wait to be pulling Gs and squeezing the trigger in a real plane. Bring it on!”

Entering the contest is easy and free. For complete details, click here: http://www.digitalplayground.com/movies/TopGuns/promotion/

One grand prize winner will be flown to Las Vegas for an exclusive meeting and photo-op with DP Contract Star Jesse Jane. The lucky winner will be fitted in flight suit and trained by actual Air Force fighter pilot instructors. Then they’ll be strapped into their very own “fighter jet” for the ride of their life! The entire once-in-a-lifetime experience with Jesse will be videotaped. The prize package includes roundtrip airfare to Las Vegas, hotel accommodations for two nights and limo service.

Digital Playground’s CEO Samantha Lewis is a pilot and says there’s nothing like the adrenaline rush of flying a plane, “I love the idea of this contest, not only because our new movie ‘Top Guns’ is about fighter pilots, but also because flying is truly an incredible experience. Jesse loves adventure and she’s really excited about getting into a dogfight with one of her fans.”

There will be 25 second place winners who will receive autographed copies of “Top Guns.” The contest runs April 1st through April 30th. The winner will be announced on May 9th. For more information and complete details on how to enter the contest, click here: http://www.digitalplayground.com/movies/TopGuns/promotion/

Digital Playground’s critically-acclaimed movie “Top Guns” is directed by Robby D. and also stars Kayden Kross™, Riley Steele™, Stoya™ and Selena Rose™. The 2 DVD + 1 Blu-Ray Combo Pack includes a behind the scenes featurette, photo gallery, deleted scenes, bonus sex scene, bloopers and more. A special fan site has been set up at www.topgunsxxx.com where fans can download the trailer, view exclusive cast photos and purchase the movie. The site is optimized for iPhone and iPad users.