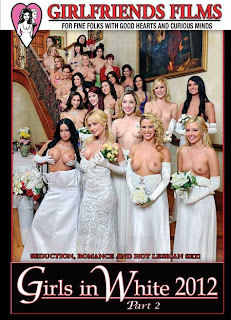 
Nominated for NightMoves’ Best All Girl Release Award, “Girls in White 2012” Is Filled with Passion & Seduction!

To view the trailer, box art and photo stills for “Girls in White 2012: Part 2,” visit http://www.girlfriendsfilms.com/index/component/virtuemart/?page=shop.product_details&category_id=20&product_id=378.

NightMoves Magazine’s editorial staff was blown away with “Girls in White: Part 1,” nominating the title for Best All Girl Release of 2012.  Fans of Girlfriends Films may cast their vote at http://www.nightmoves-online.com/voting/.

With the ball coming to an end, Cindy and Raylene sneak off to the bedroom in the beginning of “Girls in White 2012: Part 2.”  In the second scene, Veronica Avluv gives Aaliyah Love an education on refinement in fashion, manners, and sex.  Thankful for earlier help avoiding cougar Syren, Cherie DeVille gives herself to fellow debutante Angela Sommers in scene 3.  The affair between Girls in White inductees causes a controversy, so Cherie sleeps with Zoe Britton to save face in the final scene.

“Four very solid scenes with tremendous kissing, touching, and sensuality,” writes Roger Pipe of RogReviews.com in his review of “Girls in White: Part 1.”  “Overall this is another good all-girl title from Girlfriends Films.  It features good-looking women having the sort of sex fans expect.  With lots of kissing, touching and a real sense that everyone is having a great time, ‘Girls in White 2012’ should be a hit.”

Girlfriends Films posted a teaser video of behind-the-scenes footage from “Girls in White 2012” on YouTube.com.  To view the video over 130,000 people have enjoyed, visit http://youtu.be/RkjbaYClPz4.

Filmed in high definition with Sony XDCAM cameras, “Girls in White 2012: Part 2” is a visual treat.  Part 2 includes a photo guest list, plus trailers to hit Girlfriends Films movies.  The DVD is presented in 16:9 widescreen format.


About Girlfriends Films:
Girlfriends Films was created to provide realistic lesbian-sex movies for discerning viewers who demand the best.  The studio’s combination of gorgeous performers, talented directors and aesthetic focus allows for Girlfriends Films to continuously produce best-selling movies appealing to both men and women.  Girlfriends Films received AVN’s Best All-Girl Series award the last 5 years running and XRCO’s Best Girl/Girl Series 3 years in a row, while remaining “The Most Downloaded Studio” year after year on Hot Movies.  In 2011, Girlfriends Films partnered with AbbyWinters.com to create the studio’s first ever content-rich pay site – www.GFFMembers.com.  XCritic.com and TLARaw.com named Girlfriends Films the 2012 Adult Studio of the Year, while XBIZ declared GFF founder Dan O’Connell the 2012 Man of the Year.  For more information, visit www.GirlfriendsFilms.com, www.Facebook.com/GF.Films and www.Twitter.com/GF_Films.