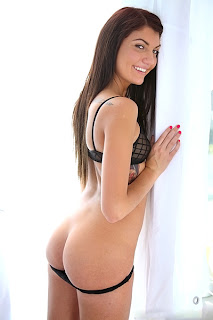 Cassandra was featured prominently in ATK's "Revenge of the Petites" where she plays a stuck up sorority girl determined to stay on top of the coed food chain. Her performance in the critically acclaimed hit has earned her high praise from critics and fans alike.

"Using a strap-on on a guy is really fun for me," says Cassandra. "I enjoy the sense of power and dominance I feel while doing it. It is definitely a mind game and I love it!"

While fans have enjoyed watching Cassandra wield a big strap-on and destroy some submissive male butts, it is her own spectacular backside that is creating the biggest buzz. Following in a long line of mega-popular XXX_ass queens, Cassandra is poised to be the next big thing in big bootied superstars.

Cassandra's remarkable rear can be found in a number of movies including "Evil_Anal_15" directed by Manuel Ferrara and Bobbi Starr's "Old School" both from Evil Angel. She also put much more than just her spectacular_ass on the line in a scene for_Kink.com and their Bound_Gangbangs line.

"I don't know when I started growing this thing," she says of her unforgettable booty. "But it is getting plenty of attention and I'm happy to use it to make it to the top. I love my_ass and I hope you do too."

Whether she is taking the lead in a hit movie, dishing out strap-on_sex or just showing off her perfect_ass, Cassandra Nix is sure to delight her growing legion of fans for years to come. Catch this star as she skyrockets to the top of the_XXX world.

About Metro Talent Management
Metro Talent Management is an adult talent agency that hires only the sexiest women for_adult movies, videos, photos and promotional work. We are female owned and book with companies such as Hustler, Penthouse Vivid, Wicked, Playboy, Zero Tolerance and many more. There is no cost to start with us and you start making money within a week of your interview.