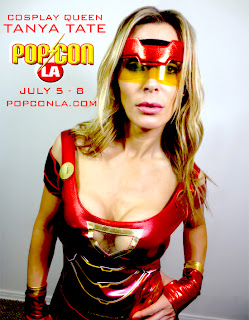 The geeky cosplayer and superhero blogger will be signing and hosting a fashion show at the first annual ITVfest Pop Culture Convention.

"The thought of me signing at Pop Con LA is quite thrilling," said Tanya. "I look forward to suiting up in one of my sexy superhero costumes and meeting the people who come to the show."

Tanya has made a promotional video for the Pop Con LA signing event, which can be viewed here: http://bit.ly/TanyaPCLAVid

While her blog, JustaLottaTanya.com recently surpassed a one year anniversary, Tanya has been cosplaying since 2010 when she attended San Diego Comic Con and has solidified her cosplayer status with a multitude of commendations for her work including:

Meet superhero cosplay blogger Tanya Tate at Pop Con LA and be sure to join her for the Cosplay Fashion Show on Saturday!