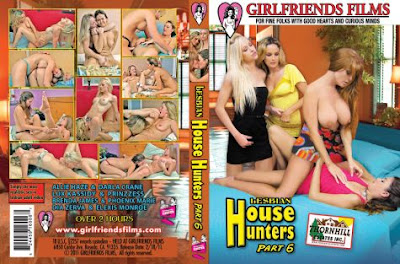 Arriving on DVD March 1 is “Lesbian House Hunters: Part 6” from Girlfriends Films. The series follows the sexy realtors in the declining Thornhill real estate market, who will do anything to make a sale. The sixth volume returns Girlfriends Films contract star Prinzzess and also features Allie Haze, Elexis Monroe, Dia Zerva, Phoenix Marie, Brenda James, Lux Kassidy and Darla Crane. Top adult industry critics have adored the “House Hunters” series since the first installment. In a review for AVN Media, XRCO founder Dirty Bob gives a previous episode 4 stars. He writes, “The housing bust has even affected Thornhill Estates—a favorite breeding ground for lesbian lovers and sneaky seduction. Here [Girlfriends Films] combine these tried and true themes, intermixed with the housing market, and the result is some solid girl / girl coupling made under the guise of playing sexy realtor…as realistic as possible. Well done.” The movie is full of the “tender lesbian action that this series and company are known for providing.”

Additional critics agree the “House Hunters” series continues to appreciate in value with each new addition. “One of the best new titles for [Girlfriends Films],” writes XCritic.com reviewer Apache Warrior in his analysis of the second installment. “Blows the mind off the viewer…‘Lesbian House Hunters 2’ is a worthy film. The sex scenes are as sensual as ever.” XCritic.com reviewer Dr. Jay adds, “Quite good from the sexual and production values perspective.” Mstrhole, from AdultDVDTalk.com happily reviewed the first film. He writes, “Sparks fly…I liked this video, and the series shows some promise…I’m looking forward to seeing the second release in the series.”

The “Lesbian House Hunters” series follows a group of real estate agents in the lesbian community of Thornhill. With the decline of the housing market, many of the agents quickly learn they must be ruthless in order to close a deal. Prinzzess and Lux Kassidy watch over the sexual negotiations of the older / younger pairing between Allie Haze and Darla Crane. To drive home her point, Allie dons a giant strap-on. A high appraisal of the action has Prinzzess and Lux entering their own heated tryst. Busty blondes Phoenix Marie and Brenda James close the deal on their lust for each other with some hot oral action. Beauties Elexis Monroe and Dia Zerva raise the value of the house by turning the master bedroom into a sexual playground of lesbian bliss. Open houses promote open legs, and the clients always end up with a smile on their face.

Girlfriends Films Vice President Moose says, “This series keeps getting better. Noting the cutthroat condition of the current housing marketing, the girls are all embracing the scheming nature of their characters. Deals are made in the bedroom.”