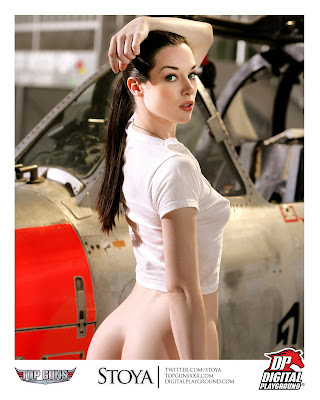 Stoya Dishes on Double Penetration and Being a Top Gun

“Video World TV is awesome and I’m so flattered to be featured in their premiere broadcast,” says Stoya about her Video World TV interview. “I always love an opportunity to talk about the lovely ladies and men I’ve touched on video for Digital Playground.”

"Who better to launch Video World TV than our one and only Stoya?” says Digital Playground CEO Samantha Lewis. “Her ability to captivate an audience has never ceased to amaze me and her magnetic presence on camera is matched only by her cunning wit and intellect."

For more on the launch visit: http://www.genesisonline.com/17/video-world-magazine-launches-video-world-tv/

She also gives viewers a taste of her newest epic film, “Top Guns”. An exclusive site has been set up at www.topgunsxxx.com where fans can download the trailer, images, wallpapers and more!

The debut broadcast of Video World TV can be seen right now by logging on at
http://videoworldmag.com/. Stoya's segment can be found about 10:30 minutes into the webcast.

About Digital Playground:
Digital Playground is the world leader in adult filmmaking and interactive formats boasting the largest HD library available, as well as sexy and powerful novelty lines to compliment blockbuster films. Since the Company’s inception in 1993, Digital Playground has earned over 350 awards, currently garners more than 80% of high definition sales within the adult market, and is a leading provider of Blu-ray™ titles. Female owned and operated, Digital Playground emphasizes quality first, employing fastidiously high production values in erotic film for women, men and couples. Digital Playground’s commitment to excellence, innovative technology, brilliant full-length productions and exclusive Contract Stars are the secrets to its success and makes Digital Playground the most highly demanded supplier of content for hotel, IPTV, cable, pay-per-view and mobile networks worldwide. For additional information, visit www.digitalplayground.com, www.facebook.com/DigitalPlayground or www.twitter.com/dpxxx.