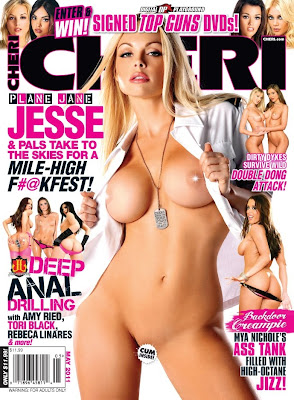 Digital Playground Contract Star Jesse Jane bares it all on the cover of the May 2011 issue of CHERI, on newsstands now. The inside photo spread takes readers to the set of Digital Playground’s next blockbuster “Top Guns” during filming of the movie’s high-octane sex scenes.

“We had such a blast shooting ‘Top Guns,’” says Jesse. “And you can see that in the CHERI photo spread. We play these tough fighter pilot chicks who get off from flying fast and fucking hard. A big thank you to CHERI for choosing me as their May 2011 cover girl.” Jesse also writes a column for the magazine.

Samantha Lewis, Digital Playground’s CEO, agrees, “Whenever you put Jesse Jane on the cover of a magazine, it’s guaranteed to sell out. Now, you have Jesse along with our other sexy DP girls in the ‘Top Guns’ photo spread. This issue of CHERI is going to sell like hot cakes!” Readers can also enter a contest to win signed copies of “Top Guns” DVDs.

The countdown is on for the launch of “Top Guns”, directed by Robby D. and starring contract girls Jesse Jane, Kayden Kross™, Riley Steele™, Stoya™ and Selena Rose.™ A special site has been set up at www.topgunsxxx.com where fans can download the trailer and view exclusive cast photos. The site is optimized for iPad and iPhone users. The YouTube version of the trailer can be seen here: http://www.youtube.com/watch?v=6MnZ31VxOS0. The movie streets on March 8th.

About Digital Playground:
Digital Playground is the world leader in adult filmmaking and interactive formats boasting the largest HD library available, as well as sexy and powerful novelty lines to compliment blockbuster films. Since the Company’s inception in 1993, Digital Playground has earned over 350 awards, currently garners more than 80% of high definition sales within the adult market, and is a leading provider of Blu-ray™ titles. Female owned and operated, Digital Playground emphasizes quality first, employing fastidiously high production values in erotic film for women, men and couples. Digital Playground’s commitment to excellence, innovative technology, brilliant full-length productions and exclusive Contract Stars are the secrets to its success and makes Digital Playground the most highly demanded supplier of content for hotel, IPTV, cable, pay-per-view and mobile networks worldwide. For additional information, visit www.digitalplayground.com, www.facebook.com/DigitalPlayground or www.twitter.com/dpxxx.