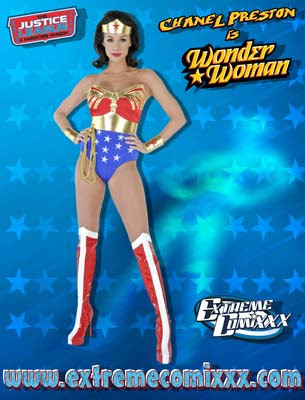 The teaser is now available to retailers and distributors to post and promote the movie’s release. Visit www.ExtremeComixxx.com.

Takedown Piracy is one of the most effective ways of preventing online content theft. Owner Nate Glass says, “Exquisite Films made the first step in combating piracy by creating feature content consumers want to own and restricting the release to home media. Takedown Piracy picks up where they left off, tracking all the ways the movie might be pirated and removing copyright infringements before they are able to spread. There’s still a bright future ahead for the adult industry, but we have to work together to get there.”

Extreme Comixxx is a division of Exquisite Films, the newest studio to launch under the XXX umbrella of Exquisite Multimedia, Inc. The premium feature studio is charged with the task of creating comic book driven parodies and high-end, erotic drama lines. For over ten years, Exquisite Multimedia, Inc. has produced and distributed some of the hottest, kinkiest sex available to watch on DVD and other platforms. The launch of Exquisite Films is the corporation’s first foray into generating quality content geared towards capturing the interest of female consumers, in addition to its loyal male fan base.
About Takedown Piracy:
Takedown Piracy (TDP) is an anti-piracy service started in April of 2009. The service was founded by adult industry veteran Nate Glass, who has been in the adult industry for over 13 years. TDP offers copyright holders an affordable and highly effective means to fight back against content thieves. For less than the cost of a part-time, minimum wage worker, copyright holders can benefit from Glass’ expertise and passion for protecting copyrighted content from thieves. To date, TDP has removed over 1.6 million content infringements. 200 piracy websites are closely monitored to always provide clients with immediate service and protection. Every month detailed reports are provided to clients with each action taken on their behalf. A price can’t be placed on trust, but with Takedown Piracy, clients can be sure the company has their best interest in mind 100% of the time. For more information, visit www.TakedownPiracy.com.

As the high-end studio from Exquisite Multimedia, Inc., Exquisite Films produces some of the largest budgeted films released in adult entertainment. The emphasis on quality and aesthetics attracts female consumers and couples, in addition to male consumers Exquisite Multimedia has long satisfied. Strong, compelling stories compliment passionate, hot sex to create acclaimed movies in the parody and love story genres. Available on multiple platforms, including DVD, in-house VOD, mobile and broadcast, Exquisite Films’ movies are ideally positioned to compete in a market demanding the very best. For more information, visit www.ExquisiteFilmsXXX.com or www.Twitter.com/ExquisiteFilms.