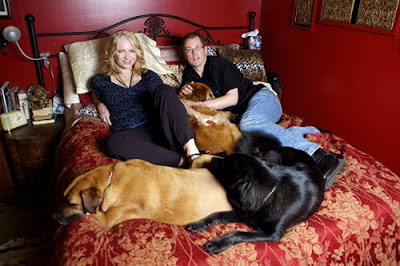 You wouldn’t know that the economy was down by looking at Severe Society Films, as they continue to increase both the quality and quantity of fetish product they are turning out, as indicated by the four 2011 AVN Award nominations they've received, up from one for the 2010 Awards.

“I’m especially proud of the nom for the first disk in our new “Kink School” line,” said SSF co-owner, performer and director Jimmy Broadway. “We’re up against some serious players in the industry- Adam & Eve, Penthouse, Vivid. The fact that AVN considers our work to be on that level is quite an honor. I’m also very pleased to see that they are willing to recognize a topic beyond straight vanilla sex, the fetish of electrical play. There’s a whole wide world of fetishes out there for people to explore, and that we can introduce these things to the curious and show them how to experience them in a safe, sane and consensual manner is a good thing.” “A Guide to Electrical Play” explains the risks and shows viewers how to safely put a charge in their sex lives with the introduction of various electrical devices. "I'm really happy our first installment of Kink School has been so well-received," added SSF co-owner Mistress D Severe. "We're planning to do a long series of these, covering all facets and levels of BDSM play."

“Strapped” is a compilation of eight female-on-male strap-on scenes featuring some of the most talented ladies currently working in the Los Angeles BDSM scene, Mistress D Severe (who also directed many of the scenes and edited all of them), Goddess Soma Snakeoil, Miss Olive, Lady Jazzmine and Princess Sheila, along with Australia’s Mistress Jadis. Comments Broadway (who appeared in last year’s AVN Award winning “Forced Fem 3” with Tara Lynn Foxx for Kick Ass Pictures and who is on the receiving end in four of the scenes on this disk) “where last year’s winner in the strap on category had a light and playful tone, these scenes have a bit of an edge, showing more of the raw sexual power of the dominant female.”

The 2011 AVN Awards show will return to the Pearl Theater at the Palms Hotel and Casino in Las Vegas on January 8th.

For more on Severe Society Films, go to severesocietyfilms.com

About Pipeline-Media
Pipeline-Media is an intimate boutique public relations firm that caters its services to the needs of its clients. With over thirty years of combined experience in the adult industry, the partners of Pipeline-Media provide unprecedented experience, unparalleled service and unique PR packages. Pipeline-Media's Tiki Pavelle brings experience from both sides of the camera in the fetish world as well as an extensive journalism background. The Pipeline-Media team boasts the talents of XRCO Hall of Fame writer Roger Pipe and his fifteen years experience writing about the adult entertainment industry. With services ranging from press releases and viral media management to mainstream promotion and clip store management, Pipeline-Media is uniquely positioned to meet the changing PR needs of clients in a changing and challenging environment.