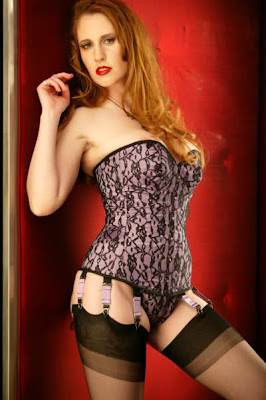 Already well established as a leader in the fetish world, Allusion Studio's owner Natali Demore is primed and ready to make 2011 a breakout year.

With eight years in the adult industry, Natali has been called the preeminent creator of girl-on-girl fetish and bondage roleplay material. Her talents are varied and include unforgettable on-screen performances and trend-setting work behind the camera.

Allusion's web sites www.BondageOrgasms.com and www.SmotheredSlave(DOT)com are already recognized as the home of some of the hottest girl-on-girl fetish action in the world. Natali runs every aspect of the sites as webmaster, producer, director, photographer, videographer and on-screen as one of the industry’s most sought after performers.

One of Allusion’s most recent DVD releases, “Superheroines: Roped & Ravished” is already among their most popular. Natali stars alongside Veronica Rayne, Mary Jane and Vivian Irene Pierce in a costumed heroine bondage adventure that has critics raving and fans begging for more.

“I grew up watching the Bionic Woman and Wonder Woman and have always been a fan of sci-fi, special effects and computer graphics,” says Natali. “Comic books and super heroine play are filled with great material for bondage movies. I didn’t expect it to be this popular though. It is already one of our best selling DVDs and the fans are loving it. I can’t wait to shoot more!”

Natali will kick off 2011 by attending the Adult Entertainment Expo in Las Vegas next month. She will be scouring the floor for new talent for her sites, working on distribution for her DVDs and will be available for interviews.

After AEE, Natali will return home for something a little different. Beginning in February she will turn her studio into a part time dungeon for future projects. She also welcomes the return of Loren Chance as her main videographer. After being away for eight months, Loren’s return has Natali excited about new endeavors.

“I have worked with Loren for a number of years and she has been an integral part of Allusion since the very beginning,” Natali states. “She is a fantastic performer, gifted videographer and has directed videos for some of the premier bondage companies in the past. We work well together and having her on board will only ensure great success for the company.”

In addition to the dedication Natali has for her web sites and production work, she is also quite involved with social networking, specifically on fetish friendly sites such as FetLife.com.

“I enjoy creating my own fantasies on video for all to see," exclaims Natali. “I love to interact with fans and also creating custom projects that fit their individual niche needs. The world is a big place filled with infinite possibilities. If I can bring some of those possibilities to life, then I feel I have achieved something special.”

About Natali Demore
Already established as a pioneer in the fetish world, Natali Demore is a woman of many talents. She shines as on-screen talent, producer, director web mistress and creative force behind Allusion Studios a leader in the world of girl/girl bondage material. Her sites www.BondageOrgasms.com and www.SmotheredSlave(DOT)com are among the most popular in the genre. Expanding her fetish empire, Natali also releases her unique brand of fetish material on DVD and remains active on social media networks.

About Pipeline-Media
Pipeline-Media is an intimate boutique public relations firm that caters its services to the needs of its clients. With over thirty years of combined experience in the adult industry, the partners of Pipeline-Media provide unprecedented experience, unparalleled service and unique PR packages. Pipeline-Media's Tiki Pavelle brings experience from both sides of the camera in the fetish world as well as an extensive journalism background. The Pipeline-Media team boasts the talents of XRCO Hall of Fame writer Roger Pipe and his fifteen years experience writing about the adult entertainment industry. With services ranging from press releases and viral media management to mainstream promotion and clip store management, Pipeline-Media is uniquely positioned to meet the changing PR needs of clients in a changing and challenging environment.