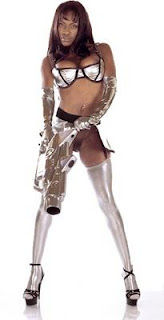 Midori has appeared in numerous magazines, including "Players" as a sensual dark and beautiful woman in front of the still camera.

Since making her adult movie debut in 1996, Midori has been strutting her stuff and sensual talents in front of a camera and across a stage. The ability comes easily for Midori and with merit which is probably why the Video Team feature release "Midori's Flava" con AVN's "Best Ethnic Themed Video", earned her 2 nominations for Best New Starlet and Best Female Performer along with winning 8 awards by other adult industry affiliates. Midori gave a memorable performance for the "Night of the Stars" award show and participated in the "AVN" awards show 3 years in a row. Aggression and professionalism is how!

Midori went from Trophy girl to closing musical performer to co-hosting this past year.

Midori has been definitely one of the hardest working woman in the adult business, her talents, intellect and class have enabled Midori to crossover to mainstream and jump the race barrier in many situations in and out of the adult arena. Midori has picked up where others have left off, opening more doors for women of color, which is why she wants to make the transition into politics along the "Free speech Coalition" bringing a multi-cultural viewpoint for a cause that she feels strongly about. Midori has made strong, positive and lasting impression to the way ethnic performers are making their mark in the adult business and strives even further.

You can always expect a stellar performance by Midori be it in front or behind a camera, directing, producing, singing, rapping, and or dancing. Look out for Midori's Millennium Madness. – Cyberspice