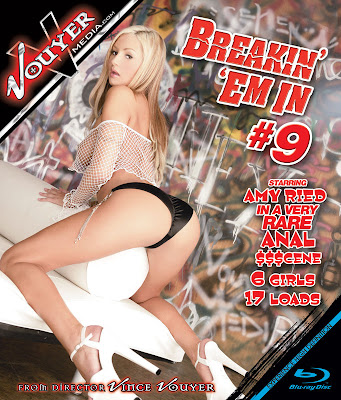 LOS ANGELES - (OCTOBER 2, 2008) - VOUYER MEDIA is pleased to announce that it is breaking into the world of Blu-ray video discs with BREAKIN' 'EM IN #9. This critics' favorite is presented in a superior, high quality 1080p HD transfer, and will be arriving on retail shelves across the country Tuesday, October 7th.

In their original review, AVN raved that "Amy Ried has a tight body. Watching her get fucked in the ass with her panties around her knees is simply a scene of heartbreaking beauty!"

Of the series itself, the magazine has praised the franchise for featuring "sizzling new girls getting initiated with professional poundings!" In addition to Ried, this title includes stand-out performances from ALLISON PIERCE, CARMEN KINSLEY, KYANNA LEE, and HAYLEE LE, as well as an exclusive bonus scene that finds VM contract actor/director JACK NAPIER breaking in brunette beauty TRISTA TANNER. In short, BREAKIN' 'EM IN #9 features six girls, 17 loads, and three solid hours of multi-award winning sex!

The mastermind behind this best-selling series from the very beginning, director Vince Vouyer has steadily become one of the most lauded directors in the gonzo arena, and his flair for sexy detail has made this franchise a true mainstay at the AVN Awards, with earlier installments snaring Best All Sex DVD in 2003, Best Pro-Am Series for both 2004 and 2005, and Best Pro-Am Release for 2007 and 2008.

If you've never experienced one of these critical favorites for yourself, the stunning new 1080p Blu-ray edition of BREAKIN' 'EM IN #9 is the perfect way to discover one of the most lauded series in adult entertainment.

And keep an eye out for TEENS IN TIGHT JEANS #3 on Blu-ray, coming later in October exclusively from VOUYER MEDIA!