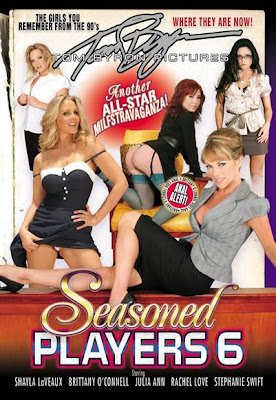 (Van Nuys, CA) October 1, 2008 – Just more than one month since the release of the last edition, Tom Byron is back with yet another installment of the his most successful line – and a new release date has been announced by Evolution Distribution…SEASONED PLAYERS 6 is coming out NEXT TUESDAY!

The DVD is set to storm adult stores on Tuesday, October 7th, 2008. Seasoned Players 6 stars these mega-porno babes: Shayla LaVeaux, Brittany O’Connell, Julia Ann, Rachel Love, and Stephanie Swift. Most of the gorgeous over-30 gals have bedded Tommy before, but if you can believe it, at least one was a Byron virgin! Julia Ann has known the director for years, but never shot a scene with him…until now. The former Vivid and Wicked girl says, “I’m proud of my age, which is 38, and I love being ‘older’ and being part of this movie.”