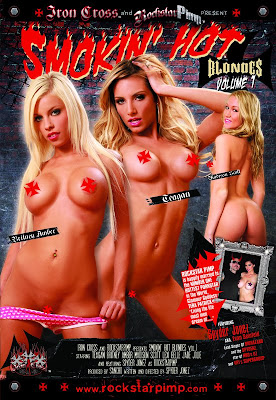 VAN NUYS, CA ) Evan Seinfeld is living the life all men dream of. He’s an international rockstar who has turned his fame and fortune into a sexual fantasyland with his new web site Rockstarpimp.com. The site has already featured some of the top stars in the industry. With so many gorgeous women coming in to be a part of the biggest celebrity sex site in the world, Seinfeld has released the first volume of scenes from the site on DVD. Smokin’ Hot Blondes features some of the best blonde babes who have visited the Rockstarpimp set.
Featuring mega-star Teagan Pressley and cuties Brittney Amber, Jade Jolie and Lexi Belle, Smokin’ Hot Blondes is getting good buzz from the critics.

Roger Pipe from RogReviews.com adds “If you are going to release a DVD called Smokin’ Hot Blondes then you might as well start with the hottest little blonde in the biz, Teagan Presley.”