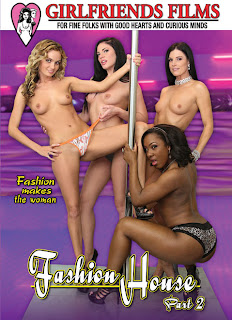 Girlfriends Films’ “Fashion House: Part 2” is now available on DVD. All the drama, backstabbing, cat fighting, and wild sex of the fashion industry are back in the chic, sexy sequel. Andy San Dimas joins Girlfriends Films contract performers Prinzzess and India Summer in over 2 hours of dress up and strip down fun.

The House of India design studio is the hottest fashion boutique in the town of Thornhill, until ex-employee Prinzzess provides some competition. In “Fashion House: Part 2,” India continues to belittle, degrade, and bed her models and designers. While she is distracted fulfilling her own sexual desires, Prinzzess meets with investors and models to build her own empire. The brewing competition allows Andy to play both sides, but when India discovers Andy’s betrayal, there is hell to pay. The second volume of “Fashion House” also stars Ms. Platinum, Janet Mason, and Ariella Ferrera.

“We are excited to finally release the anticipated follow-up to ‘Fashion House,’” states Girlfriends Films Vice President Moose. “The combination of malicious models and sexy clothes struck a chord with consumers, who made the first volume one of our best sellers of the year.”