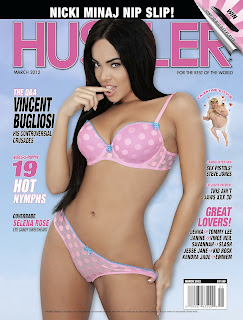 Selena ends 2011 with her first Cover and Centerfold!

Digital Playground’s Cuban sexpot takes full honors in the magazine which streets today as the cover girl & "Hustler Honey" centerfold. This is Selena's first ever layout & it keeps up the proud tradition of Digital Playground contract stars appearing in the iconic publication.

In the March 2012 issue of Hustler, Selena is featured in what is a jaw dropping cover and a feature interview. Killer articles of some of today’s top musicians are featured in addition to her extended lay out, such as Nicki Minaj, Tommy Lee, Eminem & Kid Rock. This is not an issue to be missed!

“I was so happy that Hustler chose me to be a cover and centerfold! I wanted this so bad and it is a huge honor! Love it! ” exclaims Selena.

Selena is coming off a very busy December shooting schedule completing two features in time for the 2012 awards season with Best New Starlet nominations for both the XBiz & AVN Awards. The “Escaladies” series is her signature series and is also highly nominated. To view the trailers, go to:

About Digital Playground:
Digital Playground is the world leader in adult filmmaking and interactive formats boasting the largest HD library available, as well as sexy and powerful novelty lines to compliment blockbuster films. Since the Company’s inception in 1993, Digital Playground has earned over 300 awards, currently garners more than 80% of high definition sales within the adult market, and is a leading provider of Blu-ray™ titles. Female owned and operated, Digital Playground emphasizes quality first, employing fastidiously high production values in erotic film for women, men and couples. Digital Playground’s commitment to excellence, innovative technology, brilliant full-length productions and exclusive Contract Stars are the secrets to its success and makes Digital Playground the most highly demanded supplier of content for hotel, IPTV, cable, pay-per-view and mobile networks worldwide. For additional information, visit www.digitalplayground.com, www.facebook.com/DigitalPlayground, www.twitter.com/dpxxx.