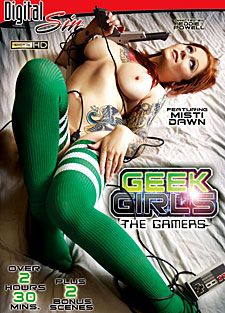 Hot Girls Who Are As Passionate About Online Gaming As They Are About Sex!

Digital Sin debuts its new line, “Geek Girls” Sept. 29th. The first installment of the series, ‘The Gamers’ gives an inside look at the adult industry’s hottest gamers: Misti Dawn, Gia Steel, Kimber Peters, and Lea Lexis. Whether it is World of Warcraft, Call of Duty or a variety of other popular games, these girls love games and the guys who play them.

Misti Dawn says of gaming, “I’m into it because I don’t know how not to be. Gaming was engraved in me at a young age. I have some friends that work in the gaming industry and I immediately think they are hot based on that. Generally, just nerdiness turns me on.”

These girls are the real deal. Each one is passionate about her preferred games. Be it RPG, FPS, MMO or other game types, these girls are serious. Director Eddie Powell says, “It was great working with women that actually play video games in their personal lives. The film is more authentic than just handing them a remote control and having them fake their way through it.”

“Geeks Girls - The Gamers” is more than just a pretty face. The high energy sex scenes are coupled with insight into each girl and what turns her on in all aspects of her life. Belle Casten, New Sensations’ Vice President of Global Sales says, “We wanted to choose girls who are sexy and serious about their gaming, and to break the mold of what one might think of when they hear the term, ‘girl gamer’.” You won’t want to miss this one-of-a-kind production that features some of the hottest women in porn in riveting sex scenes. If this is the future of gaming then one can only hope that someday the geeks will inherit the earth."

To view the trailer for "Geek Girls-The Gamers", visit: http://promo.newsensations.com/trailers/GeekGirlsTheGamers_1920_trailer.wmv