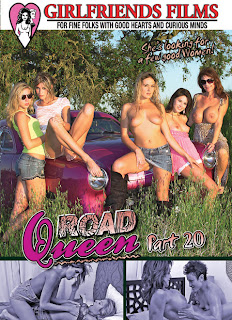 “This movie is a fine addition to this series, with a very good group of performers,” writes XCritic’s Apache Warrior in his review of the series’ previous volume. “The pairings came up smelling like a rose. The standout performances go to Veronica Avluv, Shyla Jennings, and Deauxma. Sexy Veronica continues to show everyone that she is a good actress and sensual performer. Shyla's year with this studio continues to be quite strong with this appearance while Deauxma provides solid passion. I recommend this film and look forward to seeing the Road Queen’s next adventure.”

Set in Northern California, “Road Queen: Part 20” features four passionate sex scenes along with compelling drama from the ongoing lesbian soap opera. Shyla continues to be confused about her sexuality leading up to her marriage to a man. In scene one, Keira tries to convince Shyla to call off the wedding by reminding her of what she will give up. In the second scene, Syd is impressed with Deauxma’s engine, so the cougar takes her for a ride in the car… and the bedroom. Kara comes over in scene three to use the outdoor shower. Turned on by the naked, soapy girl, Elexis decides to give her a hand. Once clean, Kara comes inside the house in scene four to play with her friend Chastity. Showing off her fire twirling skills, Chastity’s talent ignites sparks between the young lesbians. Wherever Deauxma travels, wild times follow in the “Road Queen” series.