The Theatrical Premiere of Wicked's "Horizon" is a Star-Studded Success 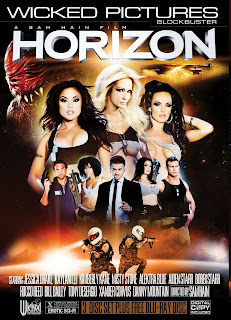 The evening began with a cocktail reception during which the cast mingled with such industry talent as Chanel Preston, Isis Taylor, Tommy Gunn, Katie Kinns, Brad Armstrong, Marcus London, Lucy Vonne, Craig Melone, Girls & Corpses magazine founder Robert Rhine, Burning Angel Entertainment’s Brian Street Team and many more. After the reception, guests were invited into one of the Landmark’s largest screening rooms to enjoy the first public screening of Horizon.

Coming hot on the heels of Steven Soderbergh’s Contagion, Hain’s special-effects laden space adventure is the first adult film to be shot with the Red Epic camera system, the same revolutionary technology first used to create Soderbergh’s hit. And thanks in part to the Landmark’s state-of-the-art projection system, history was made as Horizon became the first adult film to be screened theatrically in 2K.

After the screening, Hain and his cast gathered before the throng of mainstream and adult press in attendance for a spirited (and often uproariously funny) Q&A session and more group photos.

The glamorous, star-studded evening proved to be the perfect launch platform for this cutting edge interstellar adventure. But while the screening may be over, the promotional juggernaut continues unabated; Hain will be discussing the film on the popular Internet radio program The Creedence And Bishop Show (http://cbradioshow.com/) this afternoon at 3:30 PM PST / 6:30 PM ETZ. And while the movie doesn't arrive in stores until this Friday, September 30th, fans can watch an exclusive three minute clip on Wicked's official YouTube page, www.youtube.com/wickedpictureslive.

About Horizon
A high-tech step into the year 2085, Horizon unfolds as a civilization of extraterrestrial origin has invaded Earth. Of the planet's nine billion inhabitants, approximately one third have been killed and nearly two billion more have been evacuated to a military base dug into the core of Mercury. Of the four billion humans who remain on Earth, none are expected to survive beyond the next 48 hours.

Taking a last stand against the alien onslaught, one Marine battalion remains on the surface. But they are in retreat, desperately attempting to reach the safety of the space cruiser Horizon, when events occur which place the future of the Earth and all of its remaining inhabitants in peril...

Horizon. It's high noon at the end of the universe.
For more information please visit www.wicked.com and www.wickedb2b.com.