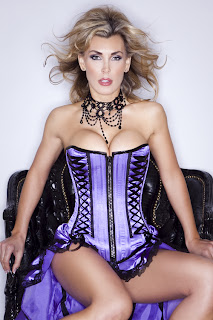 Coming off a whirlwind weekend of making media appearances at San Diego Comic Con, top British Sexlebrity Tanya Tate (http://tanyatate.com) is ready to rock Adultcon in Los Angeles. Beginning July 29th, Tanya will be at the Los Angeles Convention Center for three days appearing at Adultcon. There, the star of multi-award winning Tanya Tate's Sex Tour of Ireland and the forthcoming follow-up Tanya Tate's Sex Tour of Scotland, will be on hand to meet fans, pose for pictures and sign her latest hit DVDs.

"It's always exciting to meet the fans and supporters," said Tanya. "The energy and enthusiasm they bring is very thrilling. I'm looking forward to this weekend. It's going to be wild."

Adultcon is set to take place at the Los Angeles Convention Center July 29th - 31st. Ticket, times and other information on Adultcon may be found on the show's official website, Adultcon.com. Tanya will be posting to her Twitter feed, http://twitter.com/TanyaTate, from the show. Follow her for images and updates from the event.

Tanya is fresh from returning from the annual San Diego Comic Con. There Tanya was on a media frenzy. The popular performer was there to promote her superhero, cosplay and entertainment blog, JustaLottaTanya.com. Tanya was interviewed by mainstream media outlets like Spike TV, NBC San Diego, Dice.com, DVD on TV, TheRugged.com, The Morning Show and many others. "Comic Con was brilliant. I met a lot of cool people, took loads of pictures and really got the word out about JustaLottaTanya.com. It's a fun and sexy "work safe" site that I want everyone to enjoy. Since Comic Con, hits to JustaLottaTanya.com have tripled." explained Tanya. Playboy's site The Smoking Jacket and FHM are representative of sites that have posted about Tanya's San Diego appearance. More Tanya Tate at Comic Con coverage can be found on JustaLottaTanya.com.

Tanya Tate is on a wining streak! After a mainstream media assault on San Diego Comic Con, the blond U.K. beauty is now set for an L.A. Appearance! Meet the incredible Tanya Tate at Adultcon this weekend!