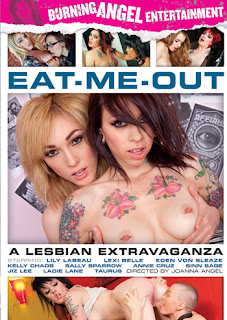 2011 AVN award winning director Joanna Angel is ushering in the next evolution of lesbian lust with Eat Me Out, an all-new exercise in extreme Sapphic sex. This star-studded lesbian extravaganza is going on sale at better retail locations nationwide this week thanks to Burning Angel Entertainment's exclusive distribution arrangement with Vouyer Media.

While Eat Me Out is already being heralded as one of the most extreme movies of Ms. Angel's career, the comely Burning Angel Entertainment CEO has never been a stranger to intense sex action – her entire career has been devoted to pushing the boundaries of pornography by creating unique adult films laced with a punk ethos and an irreverent sense of humor. Her movies' refreshingly unique cocktail of sex, rock n' roll, and pop culture have led both fans and critics to dub her "the Queen of Alt-Porn."


Now, adult cinema's original punk princess has cast her most popular Burning Angel models - and a select handful of mainstream heavy hitters - in a veritable anarchist's cookbook of lesbian desire.

Get ready for the revolutionary raunchiness of Burning Angel Entertainment’s Eat Me Out, available exclusively from Vouyer Media.