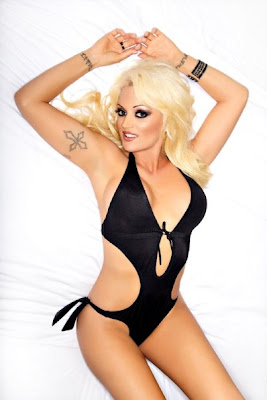 Adult entertainment superstar Monica Mayhem is used to being downloaded, drawing a crowd and taking control of a stage. All three of these elements will be part of her busy spring schedule as Monica’s musical career blends with her adult film success for some fantastic new projects.

Monica’s first single “Escape” is now available for download on iTunes and other digital outlets. The song "is about trying to escape the negative thoughts in your mind when life gets you down. It's basically a unique style of rock. I am really proud of 'Escape',” says Monica. “It is a song that means a lot to me and the early feedback I am getting is fantastic!”

“I always love meeting fans,” says an excited Monica! “Whether it’s on stage or a signing they always bring such great energy. Plus I get to spend time with Sunny and Monique and that’s always a good time!"

Adding to her growing resume of mainstream credits, Monica has signed on to do a reality show called “Tight.” It chronicles the adventures of an “all-girl rock” band made up of sexy adult film stars managed by another sexy adult film star. The three hot young adult stars joining the band with Monica will be Layla Labelle, Tuesday Cross and Alicia Andrews with Bree Olsen acting as their manager.

“This is a really exciting opportunity for all of us,” adds Monica. “It’s going to be a lot of hard work, but I’m gonna make sure it’s also a hell of a good time! 'Tight' will surely be entertaining for all to watch!“

For more Monica Mayhem please visit her at http://www.monicamayhem.com/.

About Monica Mayhem
Multi-talented Monica Mayhem has been entertaining audiences for nearly a decade. The Australian-born beauty has graced the covers of many men’s magazines and proven to be one of the industry’s top draws. She has appeared in numerous mainstream films as well her impressive list of adult movies. As an actress, model, dancer, adult film star, talk show host, musician, songwriter, vocalist, writer director and producer she has worn many hats during her career and worn them well. Since entering the adult industry in 2000, Monica has starred in hundreds of adult movies and performs her famous stage show all around the globe. She has recently revamped her popular website www.monicamayhem.com. With her signature toy line “The Saucy Aussie Collection” and the release of her autobiography, Monica Mayhem has all of the bases covered.