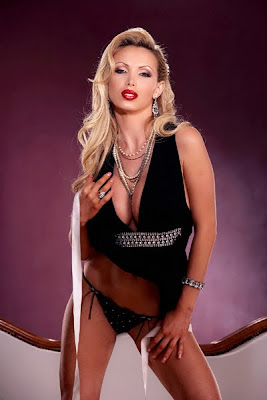 Adult superstar Nikki Benz is used to having many irons in the fire at any given time. She has recently returned from triumphant appearances down under at the Brisbane Sexpo and has new projects and a dance appearance to announce.

First, Nikki has a little tax-day treat for her fans. She is featured on the cover and in a stunning spread in CHERI Magazine’s June issue which hits stands on April 15th. The eye-catching cover shot accentuates some of Nikki’s best assets. She appears topless in a pair of sexy black panties with her gorgeous eyes and bountiful blossom beckoning readers to explore even more intimate shots inside the magazine.

"It's been a great year so far with many magazine covers and I'm proud to add CHERI Magazine to my resume" says Nikki. “It really has been a great run of magazines lately.”

In addition to CHERI, Nikki is the April 2010 Penthouse Pet, is featured in a pull out spread in this month’s AVN Magazine and graces the cover and is features in a spread in Australia’s Picture magazines. With her beautiful face and gorgeous body on newsstands the world over, it is only fitting that Nikki would make an internet splash at the same time. She has been named AVN.com’s April 2010 Cyber Siren. Nikki truly is a global superstar who can be seen in every corner of the world this month.

The CHERI cover is only the beginning of Nikki’s tax-time relief plan. She will begin a three-day dance gig in Scottsdale , AZ on April 15th at Babes Cabaret. Nikki takes the stage twice nightly, giving fans six chances to see her spectacular show.

"I'm really excited to be feature dancing in Scottsdale ” says Nikki. “I love Arizona , and Scottsdale is always a great time! I look forward to seeing and meeting my AZ fans! I'll have promo with me such as DVDs, Polaroids and 8x10 pictures. I'll also have plenty of free goodies to give out during each of my stage shows!"