Spellbound: The WICKED GIRLS Promise All Treats, No Tricks In October 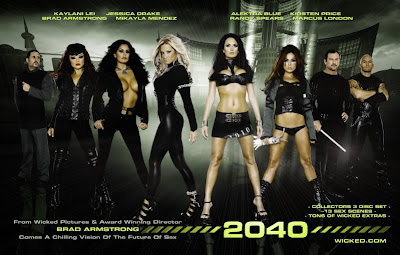 Spellbound: The WICKED GIRLS Promise All Treats, No Tricks In October

SPELLBOUND:
The WICKED GIRLS
Promise All Treats, No Tricks In October

LOS ANGELES, CA (OCTOBER 2, 2009 ROADS TO MOSCOW) - The first reviews for 2040 are in, with AVN heralding it as "superbly executed, fueled by imaginative art direction, a provocative sci-fi premise and considerable star power." Well, those very stars - jessica drake, Kaylani Lei, Kirsten Price, Alektra Blue, and Mikayla Mendez - as well as contract superstar and acclaimed writer/director Stormy Daniels, will be spending the bewitching month of October flying across the nation - and the globe - to give something back to the very fans who make their spellbinding releases successful.

In the wake of the stupendous reviews she continues to receive for Operation Tropical Stormy, Stormy Daniels will be promoting her latest work (including her current release Tormented) across the nation, beginning with an exclusive feature dance engagement October 15th - 17th at Savannah's On The Hanna, 100 Hanna Street in Harrisburg, Pennsylvania (for showtimes and directions, please call (717-233-1100). The following weekend, October 22nd-24th, she'll visit the Mile High City for three days of appearances at the Diamond Club, 1222 Glen Arm Place in Denver Colorado (for more details please contact the venue at 303-571-4242). If you can't make it out to either city, then be sure to go online to catch Ms. Daniels' IMLive chat October 14th (for details visit www.stormydaniels.com).

For Kirsten Price, the 2040 juggernaut begins tonight at Fantasies Nightclub in Baltimore Maryland, where she'll feature dance nightly throughout the weekend. The venue is located at 5520 Pennington Avenue in Baltimore, and can be contacted directly at 410-354-1217. October 11th will find her rocking the Great White North as she hosts a special bash at Tantra Nightclub, 355 10th Avenue Southwest in Calgary, Alberta.

But Price fans in the lower 48 will hardly have time to feel neglected, as the brunette beauty will return for two more personal appearances in October: more feature dancing 15th-17th at the Spearmint Rhino (15411 Valley Boulevard in the City Of Industry, California 626-336-6892), and a special Halloween hosting gig October 30th at Pink Rock N' Roll Bar And Lounge, 112 East 18th Street (18th And Boston) in Tulsa, Oklahoma.

For their part, 2040's Mikayla Mendez and Alektra Blue are geared and primed to spend some quality time with the public as well. Alektra is currently promoting 2040 to buyers at the IVD show in New Jersey in preparation for her upcoming Nightmoves appearances. And Mikayla will be holding court from October 8th-10th at the Spearmint Rhino in Rialto, California (312 Riverside Avenue, 909-873-2257) before filling up her dance card even further October 15th-17th at the Déjà vu in Springfield, Illinois (3220 Lake Plaza Road, 217-529-9309).

October is providing Wicked fans from Jersey to Johannesburg an unprecedented number of bewitching opportunities to fall under the spells of their favorite stars. Whether you've been naughty or nice, Stormy, jessica, Kaylani, Kirsten, Alektra, and Mikayla have nothing but treats in store for you this Halloween.


A high-tech step into the world of tomorrow featuring authentic props and sets from some of today's finest A-budget sci-fi flicks, 2040's intriguing premise portrays a world where adult filmmaking has gone through a number of changes, the biggest being the introduction of sex droids as performers. These "anabots" have the capacity to move, talk, and of course, make love. And with the advent of the MRA-5 (the latest prototype from an up-and-coming robo-designer)...they can even feel.

In a foreboding future where one's humanity can be measured in percentages, can true love exist?

From Brad Armstrong, the creator of Euphoria, comes a chilling vision of the future of erotica.

Written & Distributed By Roads To Moscow