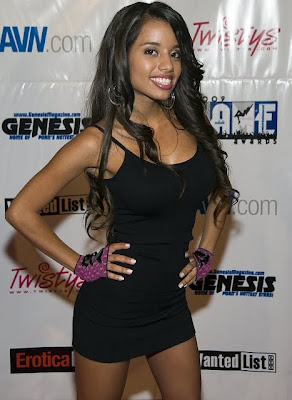 LUPE FUENTES SET TO DAZZLE THE WEST COAST AT ADULTCON

( VAN NUYS, CA ) - Lupe Fuentes is about to prove to her fans that she is a bi-coastal sensation. Fresh off of her appearance with Teravision at EXXXOTICA NY, the Latin sensation is heading west where she will stun in the sun at Adultcon in Los Angeles this weekend.

“I didn’t know exactly what to expect,” said Lupe. “The fans were great and very encouraging. When the show was over I couldn’t wait to talk to more of them. The lines were long and everyone was so nice. Now I get the chance to meet fans at Adultcon. I am very excited.”

Lupe will join other adult starlets at Adultcon 17th October 2-4th at the Los Angeles Convention Center. She will sign autographs, meet fans, pose for pictures and have copies of her brand new hit DVD available. If the reaction of fans on the east coast were any indication, Los Angeles should be in for a treat when Lupe brings her brilliant beauty, stunning smile and other assets to Adultcon.

“We knew Lupe was a special kind of adult entertainer when we signed her,” says Teravision CEO Evan Seinfeld. “Her first movie is fantastic and the fans have just flocked to her so far. Lupe has been everything we expected and a little bit more.She was so popular at EXXXOTICA that she sold out of her DVDs. Don't worry though, we are sending her to Adultcon with plenty for everyone."

Join Lupe at the Teravision booth during Adultcon 17 at the Los Angeles Convention Center October 2-4th.


About Lupe Fuentes
Lupe Fuentes is Teravision's latest contract superstar. Already an international star thanks to her days as "Little Lupe" this Spanish sensation has made the leap from teen model to full-fledged adult star seamlessly. By teaming with Teravision, Lupe is ready to take the world by storm.